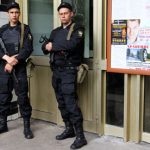 Police have searched the apartments of around a dozen protest leaders who organized the March of a Million in early May, among them Alexei Navalny, Sergei Udaltsov, Ilya Yashin and Ksenia Sobchak.  According to the Independent, the latter said that ‘officers humiliated her and stole cash from her apartment’.  Apparently searching officers confiscated computers and at least 1 million euros worth of cash as well as what was described by the Investigative Committee as ‘a large quantity of propaganda material and literature with antistate slogans’.  The four leaders have been summoned to appear for questioning today an hour before the protest march is due to begin.  Solidarity member Sergei Davidis and organizing committee member Alexander Ryklin have pledged that the march will proceed as planned, regardless of the possible absence of the leaders.  A court has extended the investigation into riots at Moscow’s Bolotnaya Square during May’s March of a Million.  Will Englund reports on the unsolved murder of the 35-year-old mayor of Sergiev Posad, Yevgeny Dushko, who was gunned down last August after vowing to fight corruption.

Foreign Minister Sergei Lavrov will raise the suggestion of an international conference on Syria when he visits Iran tomorrow.  The Minister is apparently hoping to ensure Iranian involvement in efforts to end the conflict, despite criticism from the US on this issue.  Edward Burke in the New York Times suggests that Lavrov’s stance is less controversial that the West might have it.
At the Eurosatory arms exhibition in Paris, Deputy Prime Minister Dmitry Rogozin has denied that arms supplied to Damascus by Russia can be used against the civilian population.

A dependence on high oil prices, plans for increased defense spending, the exertion of political control: a Bloomberg editorial explains why Putin’s regime is an unsavory throwback to the days of the USSR.  The plans of Russian fans to march from central Warsaw to the stadium where today’s Russia vs Poland soccer game is being held has sparked fears of potential clashes.  The run-up to the match has seen a swell of nationalist prejudices, playing on historical tensions between the two sides.

One person has been wounded and two people remain missing following a series of explosions at a military depot near the Urals city of Orenburg.