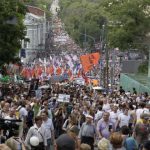 Despite heavy rainfall and threats of fines, crowds in their thousands demonstrated in Moscow yesterday again the Putin regime.  Police have put the number of attendees at 18,000, whilst organizers and opposition media estimated a turnout of between 25,000 and 100,000.  Left Front leader Sergei Udaltsov flouted a police summons for questioning in order to be present at the rally.  The demonstration presented a multipoint resolution, read by environmental activist Yevgenia Chirikova ‘calling for Putin’s resignation, the drafting of a new Electoral Code, the disbanding of the State Duma, and new national legislative and presidential elections’, RFE/RL reports.  The rally apparently passed with no incidents of violence, nor breaches of law and order.  An opposition event also took place in St. Petersburg, attracting around 7,000 people.  In the meantime, President Putin said in his Russia Day address, ‘it’s important that we hear and respect each other, strive for mutual understanding and look for compromise‘.  To find out about how the state commandeered national festivities, click here.  The European Union has apparently noted with concern the scale of opposition protests in Russia.

Following the raid on her home in which $1.8 million in cash was found (and seized, apparently) police have announced plans to investigate opposition activist Ksenia Sobchak’s financial dealings.  Venerated sociologist Olga Kryshtanovskaya has become one of the latest experts to conclude that Russia is now in a ‘revolutionary situation’.

As Washington warns of escalating conflict in Syria, US Secretary of State Hillary Clinton has warned that Russia may be sending attack helicopters to Damascus for the Assad regime.  According to the FT, Clinton has argued that the Kremlin’s claims that its arms transfers to Syria have no impact on the conflict are ‘patently untrue’.  State-controlled arms trader Rosoboronexport has said it intends to fulfill its contract for the supply of armaments to Syria.  A Texas senator is attempting to block the confirmation of the nominee for the Army’s top weapons buyer until the Defense Department agrees to take action against the Russian company supplying arms to the Assad regime.

A female staffer in Russia’s Defense Ministry has become the ministry’s sole female general.  Polish police broke up a march by thousands of Russia fans towards Warsaw stadium yesterday after fighting between fans broke out ahead of their Euro 2012 showdown.  At least 100 arrests were made and 10 people injured.

PHOTO: Tens of thousands of protesters walking along the Boulevard Ring in a March of Millions demonstration, Tuesday, June 12, 2012.  (Igor Tabakov / MT)