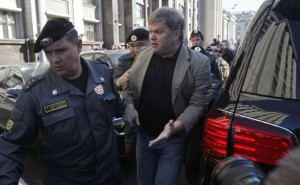 Despite ten hours of filibustering from the Duma’s opposition, who proposed some 400 amendments, the bill increasing fines for violations at rallies has been passed at the third reading by 241-147.  The fact that A Just Russia deputies posed such strong resistance, including a walk out, signifies it may have been a ‘pyrrhic victory’ for United Russia, argues Brian Whitmore.  Whilst the bill was being debated, twenty activists, among them the leader of the opposition Yabloko party, Sergei Mitrokhin, were detained at a protest picket outside the Duma building.  According to his spokesman, President Putin will consider all views before signing the bill.  AFP points out that the passing of the bill would mean the fines for protesting ‘illegally’ would be greater that that for spreading radioactive waste.

ITAR-TASS reports that investigators have brought charges against two people arrested for their part in disturbances during the May 6 March of Million protest.  RFE/RL notes from this and other examples ‘a gradual uptick in repressive measures’.   Find out  here how lawyers for punk rock band Pussy Riot are arguing that inciting religious hatred is too severe a charge.  Court-approved surveillance on private phone calls and e-mails has apparently increased 75% over the past four years, the Moscow Times reports.

At his meeting with Chinese President Hu Jintao, Vladimir Putin has commented that Afghan stability is a ‘common concern’.  According to China, it shares Moscow’s position in opposing forced regime change in Syria.  Deputy Foreign Minister Gennady Gatilov has told the press that a Yemen-style transition would be unlikely to work for the Assad regime.  The Kremlin is apparently willing to use political leverage to contest harsh sentences handed out to Russian, Ukrainian and Belarusian nationals for helping troops supporting former Libyan leader, Muammar Gaddafi.

The protest movement is not the result of frustration at the Putin regime. It’s just too much sun, argues one spinmeister.