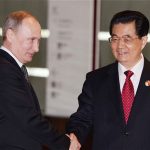 Foreign Minister Sergei Lavrov has called for a broader international meeting on the Syria crisis to include Iran and Turkey, with the aim of promoting Kofi Annan’s peace plan.   Russia and China reportedly both hope to encourage the Syrian opposition to support peace efforts by the UN envoy.  Russia’s attempts to draw on Iran for support has won an unfavorable response from Washington.  Bloomberg reports that, as the situation in Syria worsens, ‘Russia is signaling that it no longer views President Bashar al- Assad’s position as tenable’.  Following an announcement by the US that it plans to move a large number of its warships to the Asia-Pacific in years to come, President Putin said he will increase military cooperation with China, including holding more joint exercises.

According to his spokesman, President Putin will not sign into law a bill increasing for protest infringements (which has been passed in the Federation Council) if it contravenes ‘generally accepted European norms’.  The proposal off this bill ‘offers fresh evidence that Mr. Putin feels deeply threatened by the protests’ says the Washington Post.   In a new report rights watchdog Freedom House uses the term ‘Putinization’ to describe severe anti-democratic trajectories in Hungary and Ukraine.  Investigative Committee Chairman Alexander Bastrykin has pledged that more arrests will be made regarding the May 6 March of a Million opposition protests.  Russian riot police will soon be equipped with new ‘shuttlecock shooter’, a non-lethal weapon designed to quash unruly protestors.

The Moscow Military District Court has sentenced retired FSB Colonel Valery Mikhailov to 18 years in jail for spying for the US. Russia has accused Washington of fomenting Georgia’s desire to seek revenge against Moscow for the five-day war of 2008.

Nine paratrooper-firemen have died in Siberia while trying to put out a wildfire.