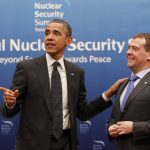 US President Barack Obama has been caught promising ‘flexibility’ on missile defense after the election to President Medvedev in a private exchange on the sidelines of the Seoul nuclear terrorism summit.  The outgoing Russia president pledged to transfer the information to”Vladimir”.  ‘It will be interesting to see, as Medvedev prepares to make the transformation to the prime minister’s seat, whether his domestic rivals try to exploit the “I will transmit this information” moment’ says Transmission.  Republican presidential candidate Mitt Romney, who has had a field day with Obama’s comments, has told CNN that Russia is the ‘number one geopolitical foe’ for the United States.  After the valedictory meeting between the US and Russian presidents, the Moscow Times wonders just how successful has the reset been? NATO chief Anders Fogh Rasmussen apparently believes that Russia would be squandering funds should it deploy tactical weapons against the planned U.S.-led missile shield.

RFE/RL considers the fate of journalist Andrei Kolomoisky, who faces five years in prison for ‘inciting extremism’ after doctoring a video of Vladimir Putin.  The Moscow Times reports on the politicization of journalists in the wake of the mass protest movements.  Masha Gessen pays tribute to Putin’s ‘oldest enemy’, former politician Marina Salye, who died on March 21, aged 77.   An apparent arson attack at the offices of civil activist group the Group of Free People in Nizhny Novgorod must be investigated, says Human Rights Watch.  A man detained in Red Square on the weekend while wearing a Blue Bucket brigade style mock car siren on his head has been dispatched to a psychiatric hospital for ‘a checkup’, Ria-Novosti reports.  The FSB apparently hopes to have a Muslim man who is being investigated on extremism-related charges forcibly detained in a psychiatric facility.  Ksenia Sobchak, Putin acquaintance-turned-protest speaker has been called in for questioning relating to an alleged attack on Kremlin loyal journalists.  The New York Times reports on how Russian-born real estate developer Janna Bullock has mounted an exhibition in Manhattan inspired by the protest movement.

According to an analysis by Deutsche Bank AG and Troika Dialog, jailed Yukos founder Mikhail Khodorkovsky has a ’50-50′ chance of being freed during Vladimir Putin’s presidency.  This report reveals the next step in ex-Finance Minister Alexei Kudrin’s collaboration with former presidential candidate Mikhail Prokhorov.  A new poll shows that following the upheavals of election season, the number of people who want to emigrate from Russia is at an all-time low.

Russia and Belarus are apparently set to discuss the unexplained suspension of passenger flights between Moscow and Minsk.   President Medvedev has appointed special representatives for Georgia’s breakaway regions of Abkhazia and South Ossetia – Aleksandr Tkachev and Taymuraz Mamsurov: RFE/RL has profiles on both.  The Washington Post reports from the South Ossetia presidential elections – branded a ‘farce’ by Georgia – where former KGB strongman Leonid Tibilov looks set to win.

Putin’s spokesman Dmitry Peskov has told Itogi magazine that his employer is a ‘true liberal’.

PHOTO: Presidents Barack Obama and Dmitry Medvedev enjoying their time together in Seoul. The summit is a farewell tour for Medvedev as a head of state.  (Pablo Martinez Monsivais / AP)