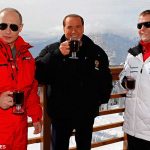 Supporters of punk group Pussy Riot have picketed the headquarters of the Moscow police in protest against the detention of two band members, arrested after singing an anti-Putin song at an Orthodox cathedral.  The band’s sympathizers have been thwarted in their attempts to hold a prayer session for the jailed activists when a church refused to allow then entry, sparking an altercation in which three PR supporters were arrested.  RFE/RL reports on how some Orthodox Church members are championing the cause of the jailed women with a petition for their release that has attracted more than 5,000 signatures.  Around 30 women, all wives of former military officers, staged a protest yesterday outside the Defense Ministry against the poor housing allocation for their families.  Seven activists from the Solidarity movement have been detained after attempting to hold an authorized rally in Red Square.  Ria-Novosti reports that around 20 people were also detained around Pushkinskaya Square as they attempted a similar action.  The Economist considers whether the protest rallies will lose their momentum.  From the entertaining to the despairing: this article offers a round-up of the movement’s slogans.  PRI has an interview with Piotr Shkumatov of the elitism-busting blue bucket brigade.  In a parliamentary debate about possible sanctions against officials involved in his death, a UK lawmaker has described Sergei Magnitsky as part of a ‘noble Russian tradition of dissidents.’

An Austrian Social Democrat who is a member of the PACE monitoring committee has refuted the committee’s claims that the presidential vote was falsified.  NATO Secretary General Anders Fogh Rasmussen has congratulated Vladimir Putin on his return to office and said that he looks forward to constructive dialogue.  White House spokesman Jay Carney has told the media that said no conclusions should be drawn from the fact that US President Barack Obama has not yet personally congratulated Putin on the result.  ‘This victory may be both Putin’s last and the final one for Putinism’ says former US Secretary of State Condoleezza Rice in a Washington Post op-ed.  Long-term ally and political soul mate Silvio Berlusconi has offered his congratulations in person with a visit to the Krasnaya Polyana ski resort, from where the President elect has announced plans to commence consultations immediately on the formation of a new Russian government.

US Secretary of State Hillary Clinton has urged Russia and China to cease supporting the Al-Assad regime in Syria.  Russia’s deputy ambassador Mikhail Lebedev has defended the Syrian government with claims that it is battling at least 15,000 al Qaeda-backed ‘terrorists‘.  Deputy Foreign Minister Gennady Gatilov has reiterated that the Kremlin will not accept a resolution of the UN Security Council if it posits the use of military force.  Britain’s foreign secretary William Hague has argued that Russia and China are paying ‘a diplomatic price’ across the Arab world for their ongoing support of the ruling regime.  A report from the U.S. Department of State has found that Russia has redoubled its efforts against the narcotics trade in recent years.

A family of nine people has died in a fire in the Perm region.