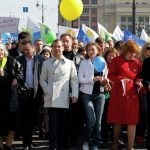 According to the Moscow Times, police estimated that more than 120,000 people participated in a march in Moscow to celebrate Unity Day yesterday, accompanied by President Dmitry Medvedev and Prime Minister Vladimir Putin.  Marchers, among them representatives from several prominent trade unions, chanted slogans demanding better protection of workers’ rights and the pension system.  Left Front leader Sergei Udaltsov and three other activists were apparently harassed by police officers who pulled their vehicle over for a check whilst they were attempting to reach the city of Yaroslavl for a meeting with civil activists. Roman Dobrokhotov, the activist detained for protesting in support of Pussy Riot, has told the press that no official explanation was offered as to why he was arrested.  RFE/RL has a video report showing the clashes between Orthodox believers and Pussy Riot fans outside Moscow’s central cathedral.  In Freedom House’s annual “Freedom of the Press” survey, Russia has been placed in the 172nd spot, tied with Zimbabwe, with analysts noting ‘systematic [official] interference and obstruction in the key areas of Russia’s media environment.’
This article examines the probability that new anti-gay legislation in Russia will prompt an exodus of sexual minorities hoping to secure asylum abroad.  In 2011, Britain reportedly spent around almost $2 million on the promotion of human rights and democracy in Russia, according to the Human Rights and Democracy Report, which noted the Kremlin’s ‘ambivalence’ towards these two principles.  Masha Gessen reports on the (almost imperceptible) disappearance of Russia’s ‘invisible president’.

Foreign Minister Sergei Lavrov Moscow has voiced his indignation at Washington’s decision to deny a visa to singer and deputy Iosif Kobzon, but will not seek retaliation because the Kremlin is ‘more polite regarding artists’.  Debate around Washington’s Magnitsky sanctions continues to whirl with this piece which argues the punitive measures should apply to other repressive CIS nations as well to be effective.

Russia’s space agency, Roscosmos, has plans to send a manned mission to the moon by 2030.