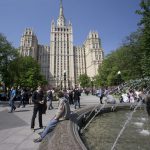 As the G8 summit gets underway, the Washington Post’s Kathy Lally argues that anti-US rhetoric in Russia has dampened of late.  Preempting Camp David discussions on Syria and Iran, Prime Minister Medvedev has warned that military action against sovereign states could lead to a regional nuclear war.  Kremlin aide Arkady Dvorkovich has apparently attempted to assuage doubts about Russia’s willingness to cooperate with the attending leaders.  The Economist considers how Russia’s behavior towards NATO is ‘becoming nastier’.  The G8 summit is a perfect opportunity for the international community to press Russia for a change of tack on the Syria crisis, throughout which so far ‘Russia’s leaders have been disgracefully cynical’, argues Bloomberg.  This op-ed stresses the importance of using IBM defense in Europe as ‘Security not against Russia, but together with Russia’.  Vladimir Putin has underscored the importance of the CIS nations by announcing that his first foreign trip as President will be to Belarus.

Co-chair of the opposition movement Solidarity Ilya Yashin who was detained near the Barrikadnaya metro station on Wednesday has been sentenced to ten days in jail.  The police have reportedly detained six people who were giving out food to protesters from the opposition’s new camp on Moscow’s Kudrinskaya Square.  Socialite turned anti-Putin activist Ksenia Sobchak, who visited the new camp, said local district officials, some of whom are opposition-minded, had legalized the sit-in by according it the status of a “festival.”  Dmitry Medvedev has told an International Law Forum in St. Petersburg that ‘the government should adapt to changes in society […] not just stiffen penalties or switch off Twitter during civil unrest’.  According to a new poll taken by VTsIOM, nearly 47% of Russians apparently believe that media influence makes people homosexual.  Find here a tale of environmental woe from the Zhukovsky forest, relayed by the Moscow Times.

A new Public Opinion Foundation has seen electoral ratings of Russian President Vladimir Putin return to 2010 levels, at around 55%.  The Levada Center has argued that, on the contrary, his popularity has dipped ‘irreversibly’.  There are, Mary Dejevsky argues here, several reasons to believe that ‘Putin III is unlikely to replicate Putin’s I and II’.