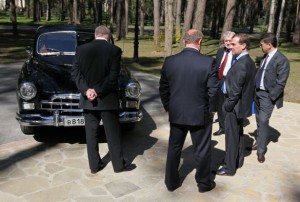 Ria-Novosti has reported that several prominent members of the presidential Human Rights Council will leave the committee after President-elect Vladimir Putin’s inauguration on May 7, ‘reflecting doubts that President-elect Vladimir Putin was dedicated to improving human rights’ says Reuters.  Outgoing member Yelena Panfilova has told a news conference that Russia has changed since she joined the Council three years ago but this change is about ‘society, not the authorities’.   The Guardian‘s Miriam Elder highlights flagrant sexism in a Russia Today defense of convicted rapist and footballer Ched Evans.  Moscow’s Anna National Center for the Prevention of Violence has found that around one in every three women in Russia tolerates domestic violence for the sake of keeping their marriages together.  Plans for a torchlit procession to commemorate World War II heroes by Moscow medical students have prompted comparisons with torchlit marches by the Hitler Youth.

The Moscow Times interviews young blogger and budding politician Ilya Varlamov in an article which raises some question as to the authenticity of his opposition stance.  As President Medvedev prepares for his exit, he has finalized the laws on gubernatorial elections and facilitating the process of running in an election.  A new environmental policy document has also been one of his valedictory gestures.  He has fired the head of Stavropol region Valery Gaevsky and named a State Duma deputy, Valery Zerenkov, to serve as acting governor.  On Medvedev’s political legacy, from the Independent: ‘It’s like when it snows in the night and the machines come and clear it up before dawn. When you wake up, there is a vague feeling it has been snowing, but hardly any sign of it. That’s the level of impact he has made’.  Vladimir Putin has compared his period as Prime Minister to a ‘special schooling’.

Russia’s ambassador to the United States, Sergei Kislyak, has warned Washington that proposed Magnitsky sanctions could hurt relations between the two countries.  Russia has blamed ‘terrorists’ for recent attempts to derail U.N.-Arab League envoy Kofi Annan’s peace plan in Syria.  Russia will use a high-tech computer simulation to showcase what it views as the dangers of a planned US missile shield in Europe at a Defense Ministry conference in Moscow to be attended by top figures from the US and NATO.  Washington apparently plans to stick to its guns on the Kremlin-contested plans.

Poland’s President Bronislaw Komorowski has warned that the West should not boycott Ukraine during the European soccer championship as it will push the nation back towards Russia.  An explosion at an arms depot in central Russia has killed six soldiers and injured four, Reuters reports.

PHOTO: Medvedev showing off a Gaz-12 to Duma heads Wednesday, May 2, 2012, at a meeting to discuss his last acts as president. (Yekaterina Shtukina / RIA-Novosti / AP)