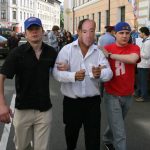 To the disappointment of those sensing a shift in Russia’s position on Syria, the Kremlin has apparently told the press that the UN Security Council should not consider new measures to resolve the crisis there and implied it would veto any attempt to authorize military intervention. Is Putin’s stance ‘a cynical game of power politics’, as the Washington Post would have it?  The Iranian Navy has apparently managed to overhaul a Russian-built submarine, despite Moscow rejecting requests for spare parts.  ‘He doesn’t mince words. He’s not a professional diplomat’: the US State Department’s defense of Ambassador McFaul who continues to receive a barrage of criticism over comments made at a meeting with students.  ‘As a proponent of better U.S.-Russian relations, I was surprised by the official reaction to my talk at the Higher School of Economics in Moscow’ said the ambassador himself.  Presidential aide Yuri Ushakov has told the press that President Putin wants to protect ‘reset’ relations with the US.

A Just Russia faction has submitted an alternative bill on protest rallies to the State Duma. The bill, which was drafted at the Alexei Kudrin Fund for Civil Initiatives, is an open attempt to counteract United Russia’s proposed legislation to significantly increase fines on protestors.  Russia’s Investigative Committee has launched two criminal cases against exiled Russian businessman Boris Berezovsky for his calls for an uprising against Putin’s regime.  Business journalist Olga Romanova, whose husband was imprisoned in what she views as a politically motivated act, talks to Kathy Lally about keeping the protest movement going.  Tom Balforth explains how Igor Kholmanskikh went from factory foreman to security council member.

Washington apparently has no plans to reveal the names of officials who would be blacklisted by proposed Magnitsky sanctions.  This report examines how the Mariinsky Theater’s new production of “Boris Godunov” by Modest Mussorgsky boldly compares the brutal rule of a 16th century leader and that of Vladimir Putin.