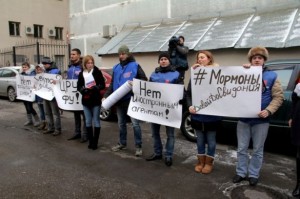 As of yesterday, a controversial new law blacklisting ‘extremist’ material on the Internet came into effect, raising fears about a potential crackdown on freedom of speech.  Platon Lebedev, the incarcerated business partner of Yukos founder Mikhail Khodorkovsky has had his 13-year sentence reduced by three years, meaning he will walk free next July.  Reuters considers the fears of ‘zastoy’ (stagnation) which are surrounding Putin’s third term.  The Prosecutor General’s Office has announced it will not open a case against A Just Russia member Gennady Gudkov in connection with his illegal entrepreneurial activity.  Activists from pro-Kremlin youth group Young Guard have staged a protest against US mormon missionaries in Russia, accusing them of spying.

Beating off the losses of earlier months, oil giant Rosneft has seen third quarter net profit more than double to $5.77 billion in the third quarter, before its $55 billion deal to acquire TNK-BP.  New data shows that an increase in production by the oil giant helped to lift Russia’s oil output by 0.5% in October to a new post-Soviet high of 10.46 million barrels per day.  Meanwhile shares in Novatek, the country’s biggest independent gas producer dropped the most in more than three years after reportedly losing a crucial supply contract with state-run Inter RAO to Rosneft.

Prime Minister Medvedev has penned a piece for the FT in which he describes the Kremlin’s plans for eastwards economic expansion.