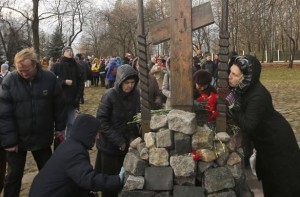 The Federation Council has passed a controversial new bill that would redefine high treason in such a way as might include practices of some NGOs. ‘It significantly increases the number of people who could be considered a traitor under the Criminal Code, and it gives the intelligence agency the right to conduct surveillance on them indefinitely‘.  Yesterday, Russia’s official Day to Commemorate the Victims of Political Repression was marked with a ceremony organised by human rights watchdog Memorial.  Prime Minister Medvedev also observed the occasion with a blog post condemning ‘[t]he war against one’s own nation’.  A statement released by Memorial noted that events of recent weeks demonstrate that ‘Russian authorities intend to rely on the language of repression — arrests, courts, camps.’  Channel One broadcaster Vladimir Pozner has voiced unexpected concurrence with this view.  An opposition rally in defence of ‘modern political prisoners’ was held to coincide with the Memorial event, attended by more than 800 people, or 2,500 according to Left Front leader and attendee Sergei Udaltsov.  Opposition figurehead Alexei Navalny has apparently been fined $1,000 for his role in the Saturday’s protest rally.  Moscow City Hall has approved plans for a rally of 20,000 nationalists this weekend.

The Russian Orthodox Church is battling with accusations that a brothel has been discovered on the grounds of one of its monasteries located a stone’s throw from the HQ of the Federal Security Services.  Three police officers have been arrested on suspicion of violently murdering an Azerbaijani man.  The financial results of Nomos-Bank, the subject of a takeover by its smaller competitor Otkritie Financial Corporation last month have been described as ‘exceptional’ by Aton Brokerage analysts, prompting speculation as to whether shady dealings are afoot within the institutions.  Mikhail Fridman’s Altimo has purchased a 6% stake in Vimpelcom from a vehicle of Ukrainian tycoon Viktor Pinchuk, to become the largest shareholder in the telecoms operator. Russia’s third-largest oil producer TNK-BP has seen quarterly net profit rise a healthy 53% thanks to lower taxes.  Rostech is planning on buying 35 of Boeing’s 737 MAX airliners in a $3.5 billion deal.

The Kremlin has apparently has spent around $300 million on compensation for residents of the Sochi Olympic zone, who have been evicted and re-housed by regional authorities.  Putin has a new limo.

PHOTO: Mourners of the victims of Stalin’s purges laying flowers Tuesday, October 30, 2012 at a memorial on the outskirts of Moscow. (Misha Japaridze / AP)