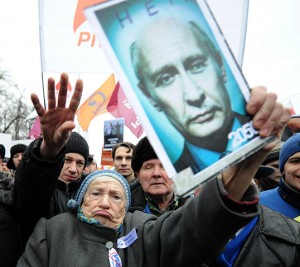 ITAR-TASS reports that Saturday’s opposition rally, which ended without incident, attracted 20,000 people and 5,000 in surrounding areas though others have estimated the figure to be much higher.  It has been reported as being the largest protest since the collapse of the Soviet Union.  Some 7,000 people rallied in Russia’s second city of St. Petersburg.  In both authorized and unauthorized, principally peaceful, protests in dozens of Russian cities, at least 60,000 people across the country are thought to have taken part.  The Moscow rally featured speeches from liberal politicians Vladimir Ryzhkov and Boris Nemtsov who called for the immediate release of more than 1,000 political activists arrested during last week’s protests as well as a full investigation into electoral fraud allegations.  According to the Washington Post, Oleg Orlov, the head of Memorial rights group, said the rally ‘turned a new page in history‘.  RFE/RL examines how the nationalism ostensibly involved in the movement made the idea of participating unpalatable for some ethnic minorities.  On Sunday around 600 nationalists apparently participated in a rally against illegal migration  on the same site as Saturday’s mass protests, Moscow’s Bolotnaya Square.   The Moscow rally was characterized by cries for Putin’s ousting, says RFE/RL, as well as being occasionally ironic in tone.  ‘I didn’t vote for these bastards!! I voted for different bastards!! Recount’, was one of the memorable slogans used.

President Medvedev chose to express his reaction to the rallies on Facebook, where he commented that he was ‘satisfied’ with the way the Saturday protest rallies were held although he ‘disagreed with the rally slogans’.   His comments sparked 8,000 comments, many of them unabashedly vitriolic.  He also stated that he has ordered checks into all the reports from polling stations, regarding compliance with election laws.  It remains uncertain whom Mr Medvedev has tasked with the investigation, says the Independent.  Putin’s spokesman Dmitry Peskov has said that ‘we respect the point of view of the protesters. We are hearing what is being said. We will continue to listen to them’.  The Telegraph reports that Peskov avowed that the contested results will stand.

Ria-Novosti examines the gentrification of the protest movement, which involved ‘relatively young, well-dressed, educated “mainstream” people’.  Shaun Walker from the Independent also looks at a newly activist middle class.  The detention of a diarist from Moscow’s upper social echelons has also been taken as evidence of a diversified movement.  The Russian Orthodox Church also apparently chimed in with calls for electoral transparency.

Russia’s former finance minister Alexei Kudrin has told Vedemosti that Russia’s political spectrum lacks a credible right-wing force and expressed his willingness to ‘contribute’ to any such party.  A Just Russia has, by a significant majority, chosen its leader, Putin-ally Sergei Mironov, to run against him in the March presidential election.  Former National Bolshevik leader Eduard Limonov will submit an application to become a presidential candidate by next week, despite being barred from the hotel where he planned to launch his campaign.  Is Alexei Navalny the most credible potential opposition candidate?