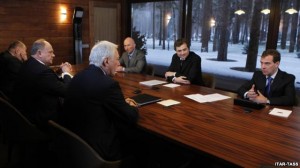 TODAY:  Prokhorov mulls purchase of Kommersant to further his presidential campaign; on yesterday’s controversial dismissals; Medvedev meets with parliamentary opposition; is an early departure on the cards for the President?  Golos defends its funding; United Russia rally a sham, some suggest; glasnost in TV news.  Moscow and West clash on Syria; Serbians in Kosovo identify with Putin

The Washington Post considers how the firing of two Kommersant journalists has ominously given the press a glimpse of the inner workings of the Kremlin machine: ‘It’s not what we say in public, it’s what we do behind the scenes, the authorities seemed to be warning them’.  Newly announced presidential candidate Mikhail Prokhorov is apparently interested in purchasing the Kommersant publishing house from the man responsible for the firings, tycoon owner Alisher Usmanov, in an attempt to gain a media platform for his bid.  It will take a considerable amount of effort to convince voters he is anything other than a Kremlin puppet, says RFE/RL.   The Washington Post offers a Prokhorov-Putin comparison through the medium of the photo-op.   Ex-Finance Minister Alexei Kudrin maintains his belief that Russia does not have ‘an established political system’.  The ultra-nationalist Liberal Democratic Party has nominated its leader Vladimir Zhirinovsky as a candidate for the presidency.  Despite the ongoing furor surrounding election rigging, at a special meeting with the leaders of the Duma’s four factions, President Medvedev has announced that the first session of Russia’s newly elected parliament will be held on December 21.  The President reiterated that he would investigate all ‘alleged violations’ in the December 4 parliamentary elections, and called for the relaxation of ‘accumulated restraints’ on Russian political activity.  In terms of his political career, Medvedev, according to one think tank analyst, ‘is basically toast […] but they can’t just discard him as a member of the inner circle and will find something nice and meaningless for him to do.‘  A report from Otkritie Financial Corporation has suggested he may even resign as President before the presidential elections, which would allow Putin to take on the role in an ‘acting’ capacity.

RFE/RL has some interviews with attendees of the pro-United Russia rally on Monday, among them migrant workers who seem to have been sent to the rally by their employers.  Harassed election watchdog Golos has hit back at the Kremlin’s accusations that since it receives Western funding, it cannot be impartial, as Grigory Melkonyants explains to Reuters that the NGO has been consistently refused a presidential grant.  Foreign Minister Sergei Lavrov has pledged the results of a probe into alleged fraud at the December 4 parliamentary elections will be open to the international community.  The Independent reports on the sudden transformation of television coverage of the anti-government protests – an order from above?  Security Council chief Nikolai Patrushev has advocated Chinese-style government regulation of the Internet following the disturbances of last weekend.  Yulia Latynina defends the involvement of the Russian ‘third estate’ in the protest movement in the Moscow Times.  The notorious protestor-beating policeman dubbed ‘Pearl Ensign’ may face four years in jail, RFE/RL reports.

Jennifer Rubin from the Washington Post urges President Obama to exert pressure on Russia ‘over the widespread and egregious violations of human rights in the Russian Federation contrary to international commitments’.  Moscow has called Western criticism of its conduct in the U.N. Security Council ‘immoral’ and asserted it is not ready to refer Syria to the International Criminal Court.   This report considers how Moscow inflames Serb defiance in the fragile, divided state of Kosovo.  Boris Chertok, one of the founding fathers of the Russian space program, has passed away, just shy of his one hundredth birthday.