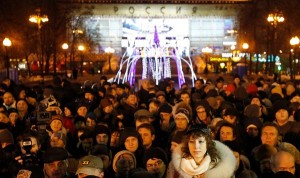 The New York Times reports that 200 people have attended an unsanctioned rally for jailed Left Front leader Sergei Udaltsov in Moscow’s Pushkin Square.  The Other Russia, which puts the number of attendees at around 1000, says that despite the ban, ralliers were allowed to enter the square after passing through a police inspection point.  The demonstration apparently terminated peacefully with no arrests.  The ‘soft response’ is evidence of a new cautiousness on the part of the Kremlin, after the December 5 rallies were broken up violently, argues the Guardian.  NPR has a feature on Russian protest songs.  ‘2011 was the year Russian civil society woke up from its long slumber and found its voice — powered by a newly politically conscious urban middle class‘.  Could the Orthodox Church prove an invaluable ally to the anti-government movement?  The Kremlin reshuffle reflects the fact that ‘Putin primarily cares about how his presidential campaign will be organized’, says one observer in a Ria-Novosti analysis of the Prime Minister’s short- and long-term strategies.  Georgy Satarov, a former aide to President Boris Yeltsin and the current president of the InDem Foundation, offers a fierce rebuttal of Putin’s unkind appraisal of the opposition on the Other Russia.

A major fire has broken out on Russian nuclear submarine the Yekaterinburg as it awaited repairs at shipyard in the Murmansk region.  The emergency ministry maintains that the conflagration, which they say caused no radiation leak, or fatalities, is now under control.  A Su-24 bomber has crashed on attempting to land at the Marinovka air base in the Volgograd region; both pilots ejected safely.  After a group of Russian bloggers claimed that they managed to penetrate the Energomash plant in Moscow’s Khimki district, which produces civilian and military rockets, and take photographs freely, Russia’s space agency Roscosmos has been ordered to improve security.

The Bhagavad Gita may have narrowly escaped a ban, but the main text of the spiritual practice Falun Gong has been forbidden in Russia, a result, human rights activists claim, of pressure from Bejiing

PHOTO: Activists gathered in Moscow’s Pushkin Square on Thursday, December 29, 2011, in support of Sergei Udaltsov, who has been in jail since Dec. 4.   (Denis Sinyakov/Reuters)