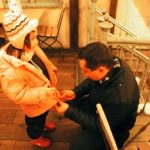 Vladimir Putin has apparently spent the holidays toiling over his election platform, on the first occasion, says the Moscow Times, that he has actually presented a formal written platform in a number of years.  Kremlin ally and Irkutsk region governor Dmitry Mezentsev has apparently had evidence of malpractice on his behalf caught on camera by opposition activists; find out more on the Guardian.  ‘If preparations for the presidential election continue this way, come March, all the names on the ballot will have been approved by Putin; even his opponents will be Kremlin stooges’ says Masha Gessen in the New York Times ,where the video can be seen.  According to his spokeswoman, billionaire Mikhail Prokhorov is apparently confident he will be able to gather the two million signatures necessary to stand as an independent candidate in the March 4 presidential election.  Russia’s election authorities will apparently allow 200 OSCE observers to monitor the presidential polls.  More in on Monday’s protest in Moscow: RFE/RL points out that the demonstration was timed to mark the anniversary of the shooting of peaceful demonstrators in St. Petersburg in 1905 known as “Bloody Sunday”, a level of suppression which Left Front leader Sergei Udaltsov views as comparable with that of the current regime.  The Washington Post takes an in-depth look at the case against Taisia Osipova, which seems from their findings to be riddled with political prejudice.
Ria-Novosti reports that the European Court of Human Rights has awarded three gravely ill remand prisoners a total of 38,000 euros following lawsuits against the Russian authorities for negligent treatment in pretrial detention centers.  In keeping with a Christmas tradition, President Medvedev has pardoned 27 convicts serving prison terms, which is 26 more than Putin offered clemency in his last year as President.  Thanks to a new law which come into effect on January 1, slandering and insulting an ordinary citizen in Russia are no longer treated as criminal offenses, but the maximum sentence for insulting a state official has apparently doubled.  A Russian military court has postponed the trial of an ex-soldier charged with deserting the army more than a decade ago who claims he was kidnapped.

Michael McFaul has been sworn in by Secretary of State Hillary Clinton as the United States’ new ambassador to Russia, a positions which entails overseeing what she describes as ‘one of the most complex and consequential relationships’ that America has.  Russia has praised the work of Arab League monitors in Syria, who, Russia’s Foreign Ministry claims, are ‘exerting a stabilizing influence’ in the restive state.

Relatives of the Lokomotiv Yaroslavl ice hockey team, whose lives were lost in an air crash in September of last year, reportedly intend to demand a new probe into the tragedy.  Deputy Prime Minister Dmitry Rogozin believes that the Yekaterinburg strategic nuclear-powered submarine damaged in a recent fire will be fully restored.

PHOTO:  Sergei Fomchenkov zips up his six-year-old daughter, Katrina’s, jacket as they prepare to go back outside in Smolensk, Moscow.  Since her mother’s arrest, she spends half her time with him and half with his sister in Smolensk.  (Will Englund/THE WASHINGTON POST)