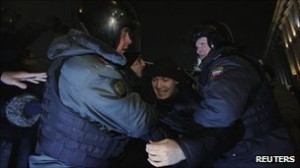 Around 200 people and an additional 100 bloggers and journalists attempted to stage an unauthorized Strategy 31 rally on New Year’s Eve but were thwarted by police.  The rally’s organizer, Eduard Limonov, was detained before reaching the square; 60 others were also arrested.  All the detainees were reportedly released the same evening, before the start of the New Year.  According to Ria-Novosti, Solidarity leader Boris Nemtsov says the For Fair Elections movement intends to hold another major demonstration in Moscow on February 4 or 5.  Ellen Barry of the New York Times reports on how the nascent middle class protest movement has transformed the face of Russia’s political opposition.  Simon Shuster urges the opposition to avoid creating martyrs for the Kremlin’s cause in the Huffington Post.  In Prime Minister Putin’s televised New Year address to the nation he reportedly called the recent protests ‘the unavoidable price of democracy’.  He also wished well-being to all ‘citizens regardless of their political persuasion’ in what the AP describes as a sarcastic speech, noted for a crude double entendre.  Medvedev meanwhile told citizens that the past year was ‘not easy but is ending well’.  A former opposition activist Taisya Osipova has been sentenced to ten years in jail on drug charges that her allies maintain are trumped up, in an attempt to pressure her husband who is a current opposition member.

President Medvedev has urged ordered deputy prime ministers Igor Sechin and Dmitry Rogozin to initiate a thorough investigation into the blaze which engulfed the nuclear submarine the Yekaterinburg on Friday, and take the necessary steps to repair the vessel.
The Guardian’s science editor reports that Russia’s ill-fated 13.5 tonne Phobos-Grunt spacecraft will fall to earth next week.  In his new position former top strategist Vladislav Surkov will apparently be responsible for Russia’s Glonass program.

Russia’s Foreign Ministry has lauded Arab League observers deployed to Syria to oversee the implementation of a peace plan and described their comments as ‘reassuring’.

PHOTO: Protesters had been trying to attend a rally in central Moscow calling for more democratic rights, Saturday, December 31, 2011. (Reuters)