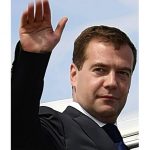 Amid all of the news circulating around Prokhorov and Kudrin and Surkov and now Gryzlov, it has been all too easy to forget one man – the President.  Poor old Medvedev.  As if it wasn’t bad enough being described as ‘toast’ by one analyst yesterday, there also came the rather shocking news that he may have to resign.  This suggestion was made in a report by Otkritie Kapital which said:

‘We do not rule out that President Medvedev could step down from the Presidency, which would automatically transfer his duties to the Prime Minister, Vladimir Putin. Under this scenario Mr. Putin would no longer be required to resign his premiership during election campaign as he takes on presidential duties. Legally, he would be allowed to retain those roles until the inauguration of a president in early May 2012’.

It has been widely noted that public support for United Russia began to tumble after the clumsy Putin-Medvedev switch announcement of September 24.  People, unsurprisingly, felt aggrieved that the political fate of the country had been decided long in advance.  It would seem unlikely, given the mounting protest movement, that installing Putin as acting president would do anything to calm the anger of those who feel, quite rightly, as if they have been dispossessed of any choice whatsoever in the country’s governing, in a way so unashamed that it borders on sheer mockery.  Medvedev’s presidency was revealed to be to all intents and purposes, a sham.  Ousting him now, even if all of United Russia’s mistakes are grafted craftily onto him, could surely only redouble that sense.  Over to the ever astute Brian Whitmore for his take, though he too admits, it’s a strange scenario:

Whoa! My initial reaction to this was, to say the least, skeptical. What led me to give it another look was the fact that Otkritie Kapital is a serious player (it is partially owned by the state-run VTB, Russia’s second-largest lender) and Tikhomirov is its chief economist.

Tikhomirov and Mundy note that according to Russia’s electoral law, Putin will need to relinquish his post as prime minister three days after he is officially registered as a candidate for president — which should be sometime early next week.

Putin submitted his papers on December 7 to the Central Election Commission, which then has 10 days — until December 17 — to register him. Putin then has three days to resign as prime minister — until December 20, the day before the new Duma convenes and two days before Mevvedev’s speech.

So is this the plan? I honestly have no idea. It has received some attention in the media, prompting a curt denial from Putin’s spokesman, Dmitry Peskov. “The situation on the financial markets is a difficult one.Not all financial analysts manage to maintain mental sobriety,” Peskov said. “Putin continues to work as chairman of the government. If any events have an entirely campaign-related nature, he will take a vacation,” he said. “But on the whole he will carry out his day-to-day duties as prime minister. He does not have to take any vacation.”

Nevertheless, if the Kremlin does decide to go down this road — and again, it’s a very big if — an important question remains: How will this play with the tens of thousands of protesters expected to take to the streets on December 24 in Moscow and other cities?

Given the fact that the protesters have made it clear that they are fed up with all the Kremlin’s insider games, it will likely do very little to calm the increasingly restive “Russian street.”