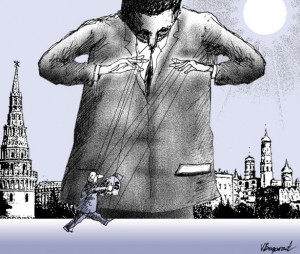 The rumor mill continues to churn over Mikhail Prokhorov’s departure from Right Cause.  Today an article in the Moscow Times quotes a senior party official who claims that the straw that broke the donkey’s, or should we say Vladimir Surkov’s back with regards to the billionaire’s political career, was apparently a desire to invoke the spirit of Ukraine’s Orange Revolution:

“The real reason that the Kremlin sacrificed the Right Cause party was because its former billionaire leader Mikhail Prokhorov had wanted to organize Orange Revolution-style tent camps in a faux opposition drive to win seats in the State Duma elections, a senior party official said Tuesday”.

A mass democracy demonstration would naturally be the Kremlin’s idea of a nightmare, but also clearly the imaginings of someone who has little sense of how prohibited street protest is in Russia.  One simply has to see photos from Moscow on the 31st of any month to know it is near impossible to hold an ‘opposition’ rally of just a handful of people in any of Russia’s conurbations, let alone set up a full-scale protest camp, no matter how potemkin it may be.Yulia Latynina also gives her take on Prokhorov’s premature exit in an editorial which demonstrates just how far the Kremlin’s tentacles spread when it comes to managing democracy:

About two months ago, several wire services carried reports that Ibragim Yaganov, an Abkhaz hero and one of the leaders of the Kabardin people, had been beaten in Kabardino-Balkaria.

It just so happens that Yaganov is my friend. He has a very bad relationship with Kabardino-Balkaria leader Arsen Kanokov, and this was not the first time he had been beaten. So I called him up and asked, “So, Ibragim, is Kanokov after you again?”

But I was surprised by his answer. “No, this was because of Right Cause,” he said.

“We have a fellow here named Mukhammed Tlekhugov who is a relative of Kanokov and the chief of the local branch of the Russian Agricultural Bank,” he said.

“People here tell me that Tlekhugov was in Moscow where he met with Prokhorov, and that Prokhorov named Tlekhugov the leader of Right Cause for our region. I am a member of the regional political council, and it appears that I was beaten just to keep me out of their way.”

I then called Prokhorov to ask about this. He assured me that he had never even heard of Tlekhugov, much less met with anyone by that name.

But one week later, the political council of Kabardino-Balkaria elected Tlekhugov as the regional head of Right Cause “by personal order of Prokhorov,” according to statements made during its session.

This means that those Kremlin flunkies who persuaded Prokhorov to play their little game were negotiating party posts by using his name without his knowledge.