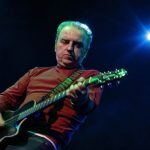 Medvedev has always been the tandem member with rock leanings, via a professed interest in Deep Purple and Led Zeppelin.  Putin, we can presume is more of a crooning fan, if his lugubrious rendition of Blueberry Hill is anything to go by. But the power vertical has experienced several conflicts with the rockosphere, as the major case against critic Artemy Troitksy recently demonstrated. Now it seems,  there are other axes to grind.  Frrom RFE/RL:

Three and a half years ago, the rock bands Mashina Vremeni and Chaif led the celebrations for Dmitry Medvedev’s election as president with a gala concert on Red Square.

Disillusioned and frustrated, they now they won’t be doing the same for Vladimir Putin if, as is widely expected, he wins Russia’s presidential elections in March of next year.

“I don’t really like what is going on at the moment,” Andrei Makarevich, the front man for Mashina Vremeni, tells RFE/RL’s Russian Service. “They’ve already told us who will be president. The problem is not that it is Putin. Rather, it is the feeling that we’re being robbed of what was left of our electoral rights.”

The revolt of the rockers is just the latest manifestation of discontent regarding Putin’s decision to return to the presidency, which was announced at a congress of the ruling United Russia party on September 24. At the same congress, Putin proposed that Medvedev lead United Russia’s party list in elections to the State Duma in December and then serve as his prime minister.

This admission was the last straw for Mashina Vremeni and Chaif, both of whom performed at a concert titled “I Choose Russia!” to celebrate Medvedev’s March 2008 election.

Vladimir Shakhrin, Chaif’s front man, says he now feels particularly betrayed by Medvedev’s admission that it had always been the plan for Putin to retake the presidency in 2012.

“I feel like the 2012 elections have already come and gone,” he says. “We had hoped for a different story and thought a different outcome was possible. When Dmitry Anatolevich [Medvedev] said that, ‘In principle, we decided all of this in 2007,’ it just killed me. He should never have said that.”

Shakhrin adds that he felt “uncomfortable” when he watched last weekend’s televised United Russia’s congress, in particular when delegates greeted every statement by Putin and Medvedev with a standing ovation and cheers.