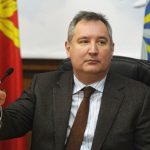 When Dmitry Rogozin was Russia’s envoy to NATO, it was rare that a week passed without some sort of indignant diatribe against the organization emerging from his corner. Whether this involved threatening to cut off its transit route to Afghanistan or blasting its military exercises, or simply launching accusations that its members were conspiring against the Russian Federation, there was ne’er an excuse too small for a dig. At the end of 2011 he was appointed deputy prime minister, in a move seen as an attempt by Putin to draw the hawkish, nationalist elements of Russia’s political elite closer to its core.  Since then he has continued to sharpen his tongue on matters domestic.  It seems however, that even now, he cannot resist rattling his saber on NATO-related affairs.

This week a wave of popular discontent has been noted in the city of Ulyanovsk, as a result of reports that NATO intends to turn its airport into a transit hub, stoking local fears about the presence of foreign troops and potential drug trafficking.  This time however, rather than launching scathing remarks about the treaty organization, Rogozin has taunted instead what the Kremlin perhaps currently views as a worthier target – the political opposition.  From the Moscow Times:

The opposition criticism was ridiculed by Deputy Prime Minister Dmitry Rogozin, who oversees the defense industry and declared last month that “the transit of NATO toilet paper” cannot amount to treason.

Writing on Facebook late Monday, he called the Ulyanovsk protests the “most absurd possible,” arguing that they resembled “Alaskan Aleuts taking a vow of silence in protest against a rams’ testicles surplus in the Antarctic.”