Rumble in the Congo 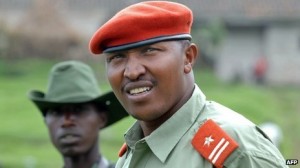 It’s one of the world’s largest untapped reserves of precious metals and natural resources.  It’s also an ungoverned “Wild East” drawing in competing militias into prolonged bloody wars, and soon, possibly the neighboring states competing for influence.  Welcome to the eastern corner of the Democratic Republic of Congo (DRC).

Last week, Africa watchers worldwide were shocked and relieved when Bosco Ntaganda, the notorious Rwandan-born warlord wanted for terrorizing the eastern part of the DRC, surrendered to the American Embassy in Kigali asking for transfer to the International Criminal Court at the Hague.  After all, it isn’t every day that an infamous warlord wanted for crimes against humanity voluntarily surrenders.

Ntaganda’s surrender comes just after 11 countries in the region signed a regional peace accord designed to curb covert support for ruthless armed groups in the region and restore peace and stability to the DRC. The UN Secretary General Ban Ki Moon is also pushing for authorization of an “Intervention Brigade” as part of MONUSCO (the UN force in the DRC) that would have a mandate to meet force with force to battle the armed groups.

On the surface it would seem like these two developments were a fitting and just end to a very long and bloody chapter for the central African region, however in actuality, it is highly unlikely that either one will bring an end to the violence.

In fact just days after the accord was signed, Ntaganda’s armed group allegedly sponsored by Rwanda, splintered into two factions which went to war with another in the DRC, leaving the former warlord a refugee and likely leading him to turn himself in.  Security analysts in the region believe that Ntaganda turned himself in because it was his best shot at staying alive.

As the violence intensifies in this mineral rich area of Central Africa, neighboring nations are getting pulled into armed disputes via their guerrilla proxies, which could easily escalate to intra-state warfare.

An earlier peace accord in 2003 had already put an end to a five-year civil war involving six countries including Angola, Zimbabwe, Namibia on the one side against the rebels sponsored by Uganda and Rwanda on the other.  That war resulted in 2 million casualties in the DRC, many of them civilians. Unfortunately, the armed bands sponsored covertly by Uganda and Rwanda did not disband after the civil war. Instead they remained illegally embedded in the eastern part of the DRC and became rivals for influence against one another, setting up a dangerous proxy struggle between Rwanda and Uganda within the DRC’s borders.  This latest accord was an attempt at getting that struggle under control. Unfortunately, it is failing.

Instead, in recent days, that proxy struggle is escalating.  Rwanda recently threatened to send its troops into the Congo unless Uganda withdrew its forces. Uganda did not take the threat kindly.  Ugandan Defence Minister issued a statement saying  “If Rwanda attacks us directly we shall fight them ourselves. If they attack us using proxies, we shall fight those proxies.”

The war of words continues with new statements from each side becoming sharper and more bellicose. In the meantime, this brewing conflict has left the Congolese government understandably disturbed and angry.  Congolese foreign affairs minister Leonard She Okitundu issued remarks angrily condemning Rwanda and Uganda for choosing to fight each other inside the DRC, rather than across their common border.

Complicating this matter even further is what is happening in the DRC’s mineral rich southern region. Since its bloody history as a Belgian colony, the DRC has long been the object of intense power struggles as regional states compete over its rich reserves of copper. According to a recent Reuters article “Decades of corruption and a brutal civil war brought Katanga to its knees. Relative stability since the 2003 peace deal and ensuing elections, plus high metal prices, brought private miners. Officials say Congo’s copper exports jumped to 600,000 tonnes in 2012, from under 20,000 a decade ago.”

Today that stability is starting to crumble again as armed groups from all over the region have begun to launch attacks in the region.

The sad consequence of the struggle in the Eastern and Southern regions of the DRC is the impact that it has had on the people.  The Congolese people have lived for too long in abject poverty with little access to healthcare, education, and other basic necessities. Moreover, they have suffered systemic sexual assault, forced conscription by armed groups, and even massacres of entire villages on a massive scale and continue to face the same threats today.  More than 2 million people have been killed in the DRC’s internal warfare.

If this weren’t horrible enough on its own, these constant power struggles involving actors from all over the region threaten to embroil entire nations in war.  While it is high time for a new peace accord and this one is certainly welcome, it must have real teeth to prevent further bloodshed.

The international community can and should be taking greater action in support of this accord.  Both citizens and entrepreneurs are yearning for enough peace and stability to get the economy going, and given the country’s natural wealth, this could quickly translate into rapid growth and development if handled properly.

It is no secret that both Rwanda and Uganda, two of the biggest aggressors in the history of this conflict, depend greatly on Western development assistance.  If donors were to demand greater accountability in preventing further aggression, we could foresee a reduction in the economic pillaging and human rights abuses.  Furthermore, there should be incentives in place to promote greater transparency in the mining concessions, financial sector, and government, which would give the international community greater confidence and good faith in the potential for progress in the DRC.

Part of the problem is that the U.S. is not the only foreign entity that carries weight in the region. With its strong economic ties, China also has a great deal of incentive to contribute to promoting stability in the region. John Campbell, a fellow at the Council on Foreign Relations says it best in a recent posting: “In sum, the exploitation of Congo’s vast resources by competing elites and militaries for personal enrichment promotes insecurity and stymies development. Only very strong Western and African public outcry and a change in China’s nonintervention approach might open the possibilities for change.”

If the U.S., China and other Western powers could put aside their competition to “win” Africa, and instead bonded together to put greater pressure toward solving the conflict in the DRC once and for all, the newly agreed peace accord may have a real chance of finally turning around a decades-old spiral of violence and give the people of Central Africa the peace that they surely deserve.

Until such a major shift, it is difficult to imagine any end to the current violence and instability.