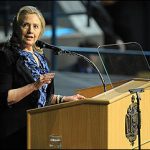 At the beginning of this week, Syria’s foreign minister Walid al-Moualem traveled to Moscow in an apparent attempt to solicit support from one of the only administrations which still stands by the Assad regime.  The result of the meeting: a few wooly statements from Sergei Lavrov relating to the importance of more ‘action’ and adherence to Kofi Anna’s beleaguered ceasefire plan. Today it was reported that US Secretary of State Hillary Clinton has lost her patience with the Kremlin’s softly-softly approach, stating categorically that Russia’s ‘refusal to join with us in some kind of constructive action is keeping Assad in power, well-armed, able to ignore the demands of his own people, of his region and the world’.  A few days ago an Associated Press analysis thoughtfully considered why and how Russia will reposition itself as the Middle Eastern state, the largest purchaser of Russian arms, becomes a pariah regime:

Russia appears to have concluded things are destined to change in Syria, some experts said. It also wants to cast itself as a constructive international player, avoid blame for blocking an end to the bloodshed and ultimately retain long-term influence in Syria.

“Russia has begun to understand that the Syria that was is already gone,” said Alexei Malashenko, a Middle East expert with the Moscow Carnegie Center. “It has started to realize that Bashar Assad will be gone soon, and it needs to think about the future.”

But Russia will only pressure Syria to the extent that it does not weaken itself on the international stage, analysts said.

Even as Russia has criticized Assad, it still insists that any UN resolution on Syria should refrain from ultimatums and threats to Damascus. Moscow says it learned a bitter lesson after its abstention on a UN resolution paved the way for NATO’s campaign in Libya, a mandate Russia says the alliance abused.

The Kremlin also has domestic reasons for backing the Syrian government. Putin, who will move back into the president’s seat next month, views the Arab Spring uprisings as foreign-inspired mutinies and apparently fears his own rule may come under similar pressure.