Russia on the Threshold of Change? 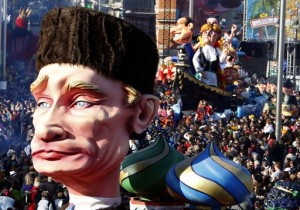 Predicting the imminent collapse of Vladimir Putin’s political model is a cottage industry for a number of analysts, and Russia’s persistant failure to comply with this vision has been no deterrence.  The argument is quite simple:  by destroying separation of powers and eliminating the ability of the judicial system to independently settle disputes, both corruption and fear have become the organizing principles around which loyalty is built under President Putin.  There’s a notable absence of legitimacy to the power vertical, and it is the scent of this weakness that is irresistible to the analysts.  They frequently anticipate that an existential problem will arise out of uncertainty, that when a big tree falls – from Luzhkov to Pekhtin – the elites have to re-evaluate to check whether the unwritten rules still apply and will keep them safe.  Despite these repeated events of falling elites, somehow the structure lumbers along supported by a series of mutually supportive interests within the bureaucracy.  Francis Fukuyama once foolishly declared the “end of history,” but when looking at today’s Russia, one could call it the “end of ideas.”  And yet nothing happens: Putinism hasn’t collapsed, the December 2011 protest movement shook but did not displace the leadership, and especially the rural population still seems willing to trade growth for rights.  But the point is, can Russia’s current power continue forward without a real ideology (barring the Stalinist revival), based mostly on the argument of the lack of realistic alternative among the opposition?  Well, as Grigory Pasko is often fond of saying, you can’t understand Russia with the mind.

Below is a translation of a Radio Svoboda interview with Nikolai Petrov of Carnegie Moscow addressing some of these questions.

– Many people say that the past year has changed the atmosphere in the country.  Although it is not a political term, would you use it for your analysis?

– Yes, the atmosphere is different now. The anticipation of change a year ago, perhaps, was even stronger. Some people have been disappointed by the past year. However, it is obvious that the country is on the threshold of change.

-It does not look obvious to me. Quite the contrary, the government sends signals of further conservation and stagnation of political life in the country, despite the simulated reforms. It seems that this system is able to survive for at least another few years.

– I agree that the government sends these conservative signals. I also agree that Putin is trying to maintain the status quo. But this is not possible due to objective reasons, and in this sense I am an optimist: one should not expect a grand plan for changes, but without these changes and modernization, the Kremlin cannot maintain control over the country. Although the events in Russia could be described as a steady move towards the authoritarian regime, the government still acts in a reactive manner. The government is repressive in terms of demonstrating its threat rather than in the implementation of real persecution. A number of important political and economic trends have altered the environment, making the power have to adapt to changing conditions: as the self-inflicted political crisis deeps, the decay of the regime leads to a decrease in its efficiency. All this suggests that the five years of delays and attempts to preserve the status quo is, of course, an unrealistic deadline. Something needs to be changed.

– The government and Putin have personally offered a change in the political system. A recent amendment to the Duma elections (or, rather, a return to the old rules) is one of the examples. How do you evaluate reforms that Putin talks about?

– (I evaluate it) As a reaction to the political crisis, as an attempt to solve the problem in an ineffective way. On the one hand, we see increased pressure and oppression of the citizens and of the political elite, the constant demonstration of threats. On the other hand, they show signs of political change and reform, which, in my view, is insufficient. For example, the government re-introduces direct election of governors, but furnishes a rule with such restrictions that discredits the very idea of ​​direct elections. This, I think, is the main problem: the government carries out political reforms and does it to please someone – some other political force, without realizing that a reform is necessary foremost for its (the government’s) own sake. Otherwise the system would not be saved.

– Do you think Putin will be able to improve the system of governance by making shifts in his circles?

– Apparently, the problem is not in the staff. Many of the country’s officials are not very bad and can be quite effective. The problem is how the system is organized. The initial idea that you can buy a solution to any problem is now not working. Large and small crises that we see now and will see in the near future are the proof. For example, Krymsk: the government demonstrates that when it faced a flood 10 years ago and took some necessary measures, it really did not do anything. It again triggers a backlash: they demonstrate concern for citizens and stiffness against bosses, but face the fact that for the second time people react differently to the consequences of floods. Here’s one more example – APEC summit in Vladivostok, where a lot of money was invested. The problem is not in the fact that so much money was stolen, i.e. the low cost effectiveness, but in the fact that nobody even needed whatever was built. The same thing is happening currently in Sochi. It is not an accident that Putin reacts strongly and nervously to what is happening around the construction of the Olympic venues.

– The Sochi Olympics seem to be the primary political and advocacy project of Putin’s third term. In your opinion, what result the project will have: cost or success?

– I believe, and have believed from the very beginning, that the decision to hold the Olympics in Sochi was a big mistake. Instead of showcasing Putin’s success across the country and, in particular, in the Caucasus, the most the government can expect to accomplish is to avoid the very serious negative consequences such as increasing terrorist activity (which, unfortunately, cannot be excluded due to the unfolding situation  in the North Caucasus) and the potential loss of face. It seems clear to me now, and the government knows it as well: the best thing the government can do about the Olympics is to minimize the negative propaganda effect.