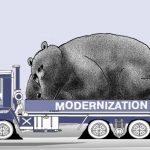 A recent op-ed in the Moscow Times by a group of analysts from Medvedevian think tank the Institute of Contemporary Development, optimistically touted the idea that the President could become Russia’s answer to Singaporean wonder-reformer Lee Kuan Yew.  ‘The distinctive feature of President Dmitry Medvedev’s leadership style is that he forces government officials to comply with his instructions, whether they are forcing them to reconsider the social tax or fulfilling state defense contracts’.

The article was met with a chorus of disdain, most notably from Yulia Latynina, who cuts through the analogy with biting zeal in the same newspaper.  The findings of the World Economic Forum’s Global Competitiveness Report, which are relayed today by the Wall Street Journal, give statistical weight to Latynina’s skepticism.  The findings make it clear that Russia, far from advancing on the wings of innovation, is in fact slipping behind due to a lack thereof:

Russia dropped three spots from the previous report as an improvement in macroeconomic stability was outweighed by deterioration in other areas, notably the quality of institutions, labor market efficiency, business sophistication and innovation. The latter is particularly embarrassing for the Kremlin amid President Dmitry Medvedev’s call for a breakthrough in innovation and the creation of a multibillion-dollar innovation center near Moscow.

The report admits that the country has potential, but this advantage, together with quality education and growing market size, is all but negated by the poor institutions, lack of competition and weak rule of law.

The report says Russia’s lack of progress with respect to the institutional framework is “of particular concern, as this area is likely to be among the most significant constraints to Russia’s competitiveness.”

The authors call for strengthening the rule of law and the protection of property rights in the country. They also note the “competition, both domestic as well as foreign, is stifled by market structures dominated by a few large firms, inefficient anti-monopoly policies, and restrictions on trade and foreign ownership.”

None of those problems are new. In fact, the Kremlin admits them and loudly calls for tackling them. However, in the eyes of the World Economic Forum, the success is limited.

Russia may take consolation in the fact that it is still placed above any of the former Soviet states, with the exception of the three Baltic states, and also above some EU countries, notably Greece, Bulgaria, Slovakia and Romania.

Predictably, Russia’s position in the ranking was hurt by inefficient government bureaucracy, corruption and access to financing. The latter is less of problem than the other two — corruption and bureaucracy, which along with crime make up the country’s main problems.