Russia’s Fear of a Free Libya 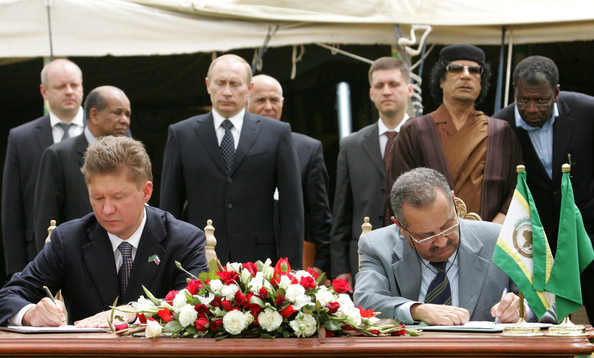 Judging by some of the initial reactions in Russia to the fall of Tripoli, you’d think that Moscow just lost a key piece on the Cold War chessboard.

In a rather dramatic statement, Aram Shegunts of the Russia-Libya Business Council, told Reuters “We have lost Libya completely.  Our companies won’t be given the green light to work there. If anyone thinks otherwise they are wrong. Our companies will lose everything there because NATO will prevent them from doing their business in Libya.”  Might he be overstating the case?

In case there were lingering doubts about how the rebels feel toward Russia, on Friday a representative of AGOCO said “We don’t have a problem with Western countries like the Italians, French and UK companies. But we may have some political issues with Russia, China and Brazil.”  We can suppose that this is code for “no more exploration for Gazprom,” as the Russian state corporation has invested several hundred million dollars there over the past 5 years, relying on the market for 7.4% of its oil production, second only to ENI’s 12%.  In addition, Russian Railways had landed a major $3 billion contract in Libya, plus major arms deals and third party oil contracts for companies such as Tatneft.

Of course there’s plenty of reasons for the rebels to hold a grudge.  It was only a week before the regime collapsed when Rosoboronexport was whining about how they had lost $4 billion in arms sales when they were cut off from selling to Gaddafi (evidently they won’t be losing their business to Syria any time soon).  A few months earlier, Putin grabbed international headlines by describing NATO’s role in Libya as a “crusade,” while other hardliners in the government frequently derided the intervention.  As a result, many Russian nationalists have taken an adamantly pro-Gaddafi stance.  Journalist Miriam Elder even mentioned on her Twitter an amusing press release from the “Eurasian Youth Union” calling for a protest under the slogan “Gaddafi – hold on! Medvedev – go!”

Despite Russia’s instinctual rejection of international interventions, especially anything involving NATO, President Dmitry Medvedev’s administration actually did everything right, in theory, to support international action on the Libyan crisis.  When Resolution 1973 came up for the vote before the United Nations Security Council, Russia abstained.  Russia imposed sanctions and banned the sale of all arms to Libya.  When Putin lashed out with the “crusades” comment, Medvedev struck him down, describing such statements as “unacceptable,” and prompting yet another round of is-there-a-split-in-the-tandem gossip (there isn’t).

But the rhetoric seems to outweigh the contrasting policy.  As the Moscow Times writes, “the nature of the Kremlin’s support for the rebels — half-hearted, tentative and tardy — has not won them many friends among the TNC. (…) Given the threats to Russia’s economic ties with the new Libya and the undermining of trust in its other relationships with Arab states, some analysts point to a general decline of Russia’s prestige in the region.”

These threats to Russia’s economic interests in Libya are, in my view, only temporary.  The idea that a new rebel-led government will remain gratefully faithful to the Western powers that assisted their defeat of Gaddafi’s military by rewarding them with business contracts, while punishing those who supported Gaddafi, is pleasant fantasy, not a guaranteed outcome.  Firstly, despite statements from the TNC taking a shot at Russia, they have also stated that they would honor all oil contracts signed by Gaddafi’s government, though we can assume that the rebels will like re-negotiate terms on several contracts.  Most importantly for Russia, ENI is looking quite likely to maintain its role in key Libyan development projects such as the Elephant Field, and this will benefit Russian interests enormously.  For many years, we have seen Putin’s clan utilize Paolo Scaroni’s company as a Trojan horse to acquire and occasionally launder assets (keep in mind that Eni once bought a stake in GazpromNeft in a Yukos auction, only to sell it right back to the Russian government).

What is interesting about the Arab Spring is the effect that this has produced among the BRICSA nations – for once, they are actually fulfilling their rhetorical consensus with coordinated action by blocking and opposing any UN-level actions that might, well, dissuade a dictator from exercising his “right,” as they view it, to use violence against protesters.  But do not for one minute assume that Brazil, Russia, China and South Africa are expressing an ideological preference in backing individuals like Gaddafi and Assad, but rather are exercising purely economic, mercantile interests in these countries.  We know from previous experience in resource rich countries of West Africa that when a transition in power occurs, these governments will quickly bribe their way back into position, no matter where they stood with the previous government.  In the new Libya, we can expect the same, with even few institutional resources available to discourage corruption in the allocation of critical contracts.

The geopolitical impact of the fall of Gaddafi is much more difficult to assess, but it does not necessarily include a deterioration of Russian influence in North African oil and gas production.  There are big changes in store in terms of the region, as countries such as Nigeria and South Africa will find the African Union transformed by the absence of Libya’s spending on allies.  Instability will likely be exacerbated in the Sahel conflict, and the opposition movements in Algeria and Syria will be emboldened by the sudden, unexpected success of the rebels.  There are two potential developments out of Libya that Russia is very concerned about in the long term:  1) a dramatic increase in the export of Libyan natural gas to Europe that Gazprom does not participate in, and 2) a significant drop in the global price of oil.  Both of these potential outcomes would represent a disruption to the market and pricing coordination favored by the Russians, and would be made less likely if the new government is undermined and beset by internal instability.

While Putin and Medvedev may have split on Libya policy, the former views this wave of uprisings with extraordinary alarm.  Libya presents a very unique example of 40-year tightly controlled petro-authoritarian state toppled by a disorganized, unprofessional, rag-tag group of rebels assisted by international air strikes.  If it can happen there, it could happen anywhere – and this is a nightmare situation for any leadership that intends to maintain political control over a country without a genuine popular mandate from the people.