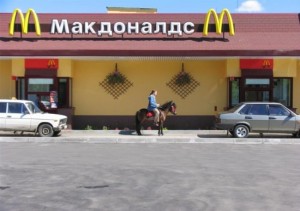 In Russia, nationalism takes many forms, bearing down even on the food Russians choose to eat.  Politics have resulted in bans on Georgian wine and mineral water, “health concerns” over the sanitary condition of Polish sausages, and now, an easy target, McDonald’s hamburgers are under attack.

As nicely summarized in the New York Times, recently an anonymous Russian woman called a radio station claiming she had found worms in her chicken sandwich purchased from a McDonald’s.  Without delay or the inconvenience of confirming the incident (in fact, McDonald’s denies it), the Kremlin’s top public health official Dr. Gennady Onishenko issued a statement advising Russians against eating hamburgers, a thoroughly un-Russian food.  Thus the Hamburger Doctrine was born.

Below is a translation of an article from DP.RU that gathers together some of the amused reactions to Dr. Onishenko’s statement – and moreover, the level of comfort people are feeling during Russia’s “summer of rising anti-Americanism.”

Russian media reports that a Moscow resident found worms in a McDonald’s burger. Federal Service on Consumer’s Rights is ready to examine this case, and while Dr. Gennady Onishchenko urges Russians to give up hamburgers, because it is “not our food.”

Reportedly, a Moscow resident bought a hamburger and opened it at work, where she saw a few worms in a hamburger. Money for the sandwich was refunded.

Onishchenko said that the Federal Service on Customer’s Rights is ready to check this case and adopt the most stringent measures in accordance with the law, if the accusations are confirmed. However, the victim has yet to file an official statement in this regard. The Chief Medical Officer believes that the woman should receive compensation not only for material but also for moral damage.

“When buying this, I may say, food, people did not expect to find there the presence of any additional living beings in the form of worms,” – Russian media quotes Gennady Onishchenko.

In addition, the chief sanitary doctor said that in his opinion, hamburgers, “even without the worms, are not the right choice of food,” because this food is “not ours.” Earlier Onishchenko gave a similar appeal in respect of sushi and rolls.

Bloggers recall another story when a governor found worms in his food during a reception in the Kremlin. “When the worms were fed in the Kremlin – Onishchenko kept quiet. Zelenin – the author of the worm photo in twitter – was fired, and the case was closed,” – s_californian writes.

In addition, other observers were reminded of a most recent case of a food poisoning of several dozen people at a summer camp near Khabarovsk. “In Khabarovsk, 46 children were poisoned with ‘our’ food in the camp, I suppose. Onishchenko says nothing, and Federal Customer Service said it was all just fine and let the kids continue to have their vacation,” – windert writes.

The user semia thinks that school food is not so great even under normal conditions: “It was an order. It would be better if Onishchenko visits schools’ canteens. Poor children.”

Some observers, however, agree with the chief medical officer – it is most probably not healthy to eat in fast-food restaurants. “People should eat a normal meal rather than warmed half-finished food. People who do not consider their body to be garbage, bypass fast food a mile away,” – tim_karsanti writes.

“In general, fast food, of course, is rubbish. Let me ask in a nicer form, where else to eat cheaply so that the stomach is not empty?” – destino opposed. “The Russian government has long set an example to the people: they do not eat burgers and other cheap food” – Alex Losev responded ironically.

Other bloggers point that the point is not whether food is ours or theirs, but whether there is a control of its quality or not. “We in Russia are generally better not to eat anything because there is no proper control over the production,” – urij writes. “Onishchenko urges Russians not to eat at all. Everything might happen. One case of poisoning follows another” – Lekarev Sofia notes ironically. “What does it mean “not ours”? Food cannot be ours or not ours,” – dgviper states.

Another question is what, according to chief sanitary doctor of Russia, “our food.” “What is our food according to Onischenko? Porridge, fermented cabbage with cucumber and vodka? Russian sauna, vodka, accordion, and salmon? Three slice of sausage on the table, we are asking for clarification” – alex999964 asks.

The burgers are one of the symbols of the United States, and observers have long noted a tendency of Gennady Onishchenko to attack certain kinds of products in parallel with the worsening of political relations with this or any other state (Georgian wines, the Latvian sprats, Ukrainian cheese). It is now, perhaps, the time for some problems between Russia and the U.S., – bloggers write half-jokingly and half-seriously-written.

“This is our response to the “Magnitsky list”,” – desaqz writes. “A person who eats hamburgers should have a sign” I am a foreign agent “,” – Daniel Lindell writes.

Onishchenko urges Russians do not eat hamburgers, and the “Russians call for Onishchenko not say stupid things” – kkozlov sums up the bloggers’ discussion.