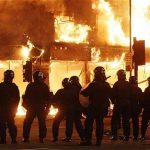 Marc Bennetts has a piece up at RIA Novosti about the Russian government’s peculiar response to the London riots.  The official line has been to blame tensions that have arisen in England over the question of immigration, citing intolerance between ‘‘indigenous’ Europeans’ and ‘immigrants’.  ‘When I spoke to family members and friends in the cities hit by rioting, it was notable that not one of them mentioned the racial make-up of the rampaging mobs,’ writes Bennetts.  I guess Russia’s response says more about the make-up of its own society than about what’s really driving unrest in England.  Here’s Bennetts:

[…] it was the lazy way to report the story. With a few notable exceptions, Russian journalists are generally extremely reticent to do any real reporting. The foreign correspondents for many Russian media organizations generally shy away from actually going out and talking to people on the streets. The “immigrant angle” is by far the easiest to write up, and also has the advantage of pandering to widespread racial intolerance at home.

But there was something else, too. The bizarre and unpleasant subtext seemed to be that Britain was somehow wrong to even try to embrace multi-culturalism, that it would be much better off following the example of Russia, where people of a “non-Slavic appearance” are regularly beaten and killed on the country’s streets.

It’s odd to compare all this casual, off-hand racism with the official line during the Soviet period.