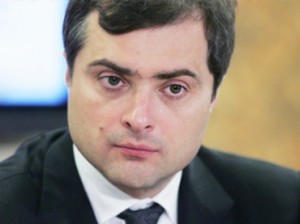 As the elections loom, analysts have their focus fixed not only on the roles of Putin and Medvedev, but of course that of ‘puppet master’ Vladislav Surkov.  In an interview by Daniel Foster with Hoover Institution fellow John Dunlop on National Review Online, in which he discusses the upcoming elections, Dunlop poses an interesting comparison between the man dubbed the Kremlin’s eminence grise and he who had the dubious honor of being known as George Bush’s ‘boy genius‘, strategist Karl Rove.  The comparison is perhaps a flippant one, as Dunlop points out, but nonetheless yields some interesting scope for analysis.  Below is just a small extract from the conversational interview, of which there will be a second part:

FOSTER: When you’ve spoken of Surkov before, he sounded to me like an old machine boss, a ward-heeler from the Gilded Age, rather than a member of the Politburo. So I want to understand the dynamic. Can you maybe talk about the weapons in his arsenal, and how he can be so effective at determining domestic political outcomes?

DUNLOP: Well he can be compared in some ways to the second-ranking party official in the Soviet era: party secretary for ideology, a very powerful position. But he’s not a Communist in any meaningful sense. In fact, he’s kind of Westernized in some ways. He’s also very modern, so in some sense he is like Karl Rove: always looking at polls and utilizing the media. But in Russia they use Russian television as an instrument to rule, since they control it. They give the people what they want to see, as evidenced by polls. They manipulate them, but they’re also giving them what they think they want. So it’s a very clever kind of policy.

FOSTER: What about his role in the elections?

DUNLOP: He’s very firm and tough about prohibiting non-regime-approved candidates from getting on the ballot. For example, the group Parnas, which is headed by very significant, former high-ranking officials in Russia — Surkov won’t let them be registered. Now, technically the decision was made by the justice ministry, and then confirmed by the courts, but everyone understands that Surkov was running it.