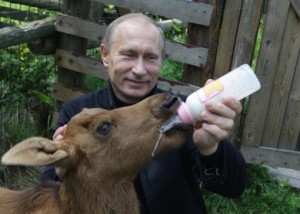 It’s a pretty firmly established meme that masculinity is a celebrated trait in Russian culture, one that has been capitalized upon by Vladimir Putin’s conspicuously frequent photo ops without clothing (even his new personal photographer is a hot model). After all, the country has turned into a welcoming graveyard for fallen 1980s action movie stars:  Bruce Willis is the trusted pitchman for a bank while shooting Die Hard 5, somebody actually let Steven Seagal’s awful band perform, Jean Claude Van Damme is visibly thrilled that someone important will hang out with him, Stallone sells vodka, and Schwarzenegger hits the slopes and presumably swaps tales of marital infidelities.

But, it’s debatable and doubtful that all that adds up to anything meaningful.  Like any meme, the idea of Russian machismo doesn’t necessarily always work, and instead often reinforces mistaken assumptions.

That’s been the experience of Phil Rosenthal, the creator of the American sitcom Everybody Loves Raymond, who is featured in a new documentary (see trailer) about his strange experience attempting to adapt the show for a Russian audience.  In addition to a wide collection of unflattering scenes of a high-strung American “suffering” through all the difficulties of “crazy” Russia (in other words, he’s annoyed by all the things that make Russia so interesting), Rosenthal’s basic gripe in the movie is that nobody thought his TV show was funny.  Instead of taking the advice of the executives, he fought back, feeling certain of the universality of this type of humor.

Unlike Campbell Soup, Rosenthal ended up being right.  After fighting with local TV executives who were so seemed to think the humor of this concept didn’t fit with Russian culture, Raymond turned out to be a big hit.  In a recent interview, Rosenthal explains why:

“I’ll tell you, it was a challenge,” Rosenthal said. “They thought that the character of Raymond was not Russian at all. He’s a wimpy guy who gets pushed around by the ladies in his life, and Russian men are tough and macho and they rule the house. And as they were telling me this, I thought, ‘This sounds a lot like (BS).’ I’m sorry. But if Vladimir Putin goes out and kills an animal with his bare hands then before he comes home, the wife stops him at the door. ‘You’re not coming in here with that mud on your feet. Wipe that off. And you’re not using the good towels. And where have you been?’ And he says, ‘Sorry, honey. Whatever you like.’ I just believe that to be true.

“I just think that that’s not Russian (or) American. That’s men and women and spouses and significant others at home that we all answer to. I don’t care who you are. You know? So that was my battle there. Whenever I thought in Russia that I was having a very tough time getting my point across to the Russians, I wanted to shake my fist and go, ‘Those Russians.’ But what I really should have been doing was shaking my fist and going, ‘Those executives,’ because they seem to be the same no matter where you go.”

I’m rather quite surprised that the show ended up being popular – I was born in the States and find the show painfully unfunny.  Inasmuch as we’d like to attempt to deconstruct and take away something insightful from what American television shows Russians like or dislike, I thought the more illuminating example came from Peter Pomerantsev, a British television executive who also went to Russia and tried and failed to adapt the meritocratic show The Apprentice.  This failed spectacularly, as Russian audiences found it totally implausible:

The show looked great, the stories and dramas all worked, but there was a problem: no one in Russia believed in the rules. The usual way to get a job in Russia is not by impressing at an interview, but by what is known as blat – ‘connections’. Russian society isn’t much interested in the hard-working, brilliant young business mind. Everyone knows where that type ends up: in jail like Mikhail Khodorkovsky, or in exile like the mobile phone billionaire Yevgeny Chichvarkin. Today’s Russia rewards the man who operates from the shadows, the grey apparatchik, the master of the politique de couloir – the man like Putin. Promotion in such a system comes from knowing how to debase yourself, how to suck up and serve your master, how to be what the Russians call a holop, a ‘toady’. Bright and extrovert and aspirational? Not if you want success. The shows that did work were based on a quite different set of principles. By far the biggest success was Posledny Geroi (‘The Last Hero’), a version of Survivor, a show based on humiliation and hardship. This chimed in Russia – a country where being bullied by the authorities is the norm.

The myth of Russian masculinity may indeed be something much more subtle, a layered imitation or guise in which we all seem to know the gender roles to play without necessarily having to believe in them or feel one way or another.  However when it comes to equality of opportunities?  That’s the area where a stronger meme can be examined.