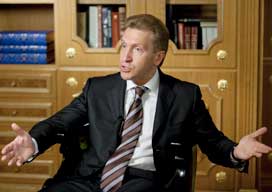 The week has so far proved rather troublesome for Gazprom.  On Monday, Vladimir Putin pointblank refused the gas monopoly an increase in tariffs to bolster its finances and suggested the company cuts costs instead.  Today the firm has put a cap on managerial bonuses, one facet of its cost-cutting drive, as per a demand last year from President Medvedev.  Both moves, observers say, are designed to appease the electorate as Putin prepares for his return to the presidency.  As if there was no intersection between state-run enterprises and the financial interests of the political elite.  An article by the FT’s Catherine Belton provides a startling reminder of just how far this is from the truth.

Belton delves into allegations that Deputy Prime Minister Igor Shuvalov used a family-owned trust to buy up $18 million worth of Gazprom shares at a point when the government was preparing to introduce reforms that would increase their value.  The offshore holdings company subsequently made more than $100 million in profits on the shares.  Shuvalov has vociferously denied any conflict of interest or improper conduct; it is apparently unlikely that demands for an investigation will lead anywhere.  Consultant Georgy Satarov in the Wall Street Journal makes the insolubility of this issue clear when he says, simply, ‘this is one of the basic problems of Russia […] The separation between government and business just doesn’t exist.’