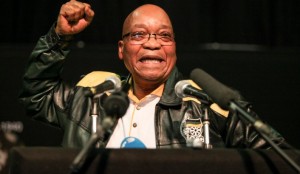 Just a few years ago, South Africa was being hailed as a darling of the emerging markets.  Crisp with swagger following the hosting of the 2010 FIFA World Cup, South Africa’s boosters pointed to a renewed mining boom, fast growing trade with other economies of the region, and admission (for some reason) into the club of the BRICS along with Brazil, Russia, India, and China, despite having a fraction of those countries’ populations.

More recently, the praise has been tepid:  fears of resource nationalism cloaked under black empowerment, horrific repressions of labour strikes at the mines, and a brewing political crisis as the African National Congress struggles to maintain representative relations among its base.  For the foreign investor attempting to update their political risk assessment of this critical market, there are a number of political factors to closely monitor before worrying about the economic fundamentals.

While a recent motion of no confidence in South African President Jacob Zuma is all but an academic exercise, his greatest test comes next month when the governing African National Congress (ANC) converges for its assembly in Mangaung.

His deputy, Kgalema Motlanthe, is dubbed the “silent opponent” but has not made his intentions public to challenge the ANC top post.

Election to the presidency of the ANC will grant Motlanthe passage to the summit of South African national politics as the ruling party is set to sweep back to power in the 2014 elections.

That means the battle for South African President is squarely at ANC level, at least for now, and officials are already campaigning while Zuma is seeking re-election.

The incumbent, however, is not having it easy at both party and national level.

A month before Zuma goes to Mangaung to face a divided ANC five years after being popularly ushered into office riding on his umushini wami [giving me my machine gun] lyrics following the recall of Thabo Mbeki, the opposition in the National Assembly is ascendent, sending shivers down the spine of many entrenched ANC elites.

The opposition parties, though with a remote chance of succeeding in their motion due to their inferior numbers in parliament, have tabulated a number of misgivings in what they suggest has been poor management by Zuma’s administration.

Among the issues that have motivated this motion is the deadly Marikana killings; the Nkandlagate scandal; the failure by the government to deliver textbooks and workbooks to school children in Limpopo and the Eastern Cape; the downgrading of South Africa’s credit rating by two major ratings agencies; the mounting disrespect for our Constitution and judiciary; unemployment; and the “uncontrollable and rising tide” of corruption in the public service.

In the Marikana assault, Zuma is blamed for the death of 34 miners at the hands of police in a brutal incident only second to the apartheid era while the Nkandlagate scandal is drawing criticism for spending a purported $23 million and more in government funds on improving his rural private residence.

Yet, the ANC has dismissed the vote of no confidence by the coalition parties in Parliament as a waste of time.

In a statement released shortly after the motion was presented on Thursday, the ANC said it had reaffirmed its “resolve to quash any frivolous and narrow publicity-seeking gimmicks masquerading as motions in the National Assembly by some opposition parties.”

The Mail & Guardian quotes Moloto Mothapo, spokesperson for the party’s chief whip, as saying that the motion was not based on any fact or evidence, and therefore amounts to nothing but character assassination.

“The so-called ‘motion of no confidence’ in President Jacob Zuma is a desperate, if not silly, publicity stunt by a group of attention-seeking opposition leaders. Such a stunt would be laughable or dismissed with silent contempt if it did not make a mockery of this august Parliament,” he said.

It’s unlikely that the motion will succeed as the case was in March 2010 in which an opposition party – COPE – filed a motion of no confidence against him. Mvume Dandala, the party’s parliamentary leader at the time, said Zuma had lost the confidence of Parliament owing to his “wilful conduct and dangerously flawed judgment”.

In order for it to be passed, it must be supported by more than 50% of Parliament, or receive at least 201 votes. The ANC still holds a two-thirds majority in Parliament, so unless its members vote against it, the opposition parties will have no way of achieving this figure.

Much as Zuma can escape the National Assembly motion of no confidence, he stands on a tough podium when his own party scrutinize his performance that has brought his relationship into sharp contrast with expelled populist ANC youth leader Julius Malema.

There is a fervent belief that Motlanthe, 63, has a fair chance taking over from Zuma and Malema, sports minister Fekile Mbalula, top minister Tokyo Sexwale are among those pushing for Zuma’s removal from office.

Malema, who was hounded out of the ANC on grounds of sowing seeds of division, is canvassing party constituencies to endorse Motlanthe ahead of Zuma at the December 2012 meeting.

Malema’s critics brand him a demagogue but there is no doubt he commands support from a cross section of ANC members and young South Africans. That is no wonder he and those rallying him support the Motlanthe group.

During the Marikana incident, Malema was a darling of the victims and miners who were protesting for better wages. That is why those in Zuma’s camp have subjected him to some political grilling through alleged criminal charges he currently faces before court.

When police shot dead 34 striking workers at the Marikana mine on 16 August, Malema toured most of South Africa’s mines, addressing workers and urging them to make the sector “ungovernable” claiming most of Zuma’s confidants were behind their operations as major shareholders.

This, according to Johannesburg-based political analyst William Gumede, was Malema’s strategy to exploit the killings to reinforce his image as the champion of poor black South Africans and ensure he sends a strong message of changing the ANC leadership from Zuma to Motlanthe.

That is a strong wave that Zuma – a veteran politician who still retains a good deal of charisma and support – will have to overcome from his opponents when the ANC converge next month in addition to the vote of no confidence.

The good news is that if the ANC is able to make a successful transition and recognize some of their weaknesses, there are many reasons for RSA’s economy to rebound in coming years.  There is greater diversity than expected:  natural resources account for just 32 percent of the whole continent’s GDP growth from 2000 through 2008, while the remaining two-thirds came from other sectors, including wholesale and retail, transportation, telecommunications, and manufacturing.  South Africa has a lot of room to grow in pharmaceuticals and biotechnology manufacturing to supply growing nearby markets as far away as Nigeria.  Economic growth has accelerated across the continent, helping to boost export business in South Africa.

As the economist JP Landman recently argued in the FT blog BeyondBRICS, “The narrative of political decline confuses the ANC and the country. South Africa is much more than the ANC.”

Let’s hope he is right.