Test For The Protest Movement 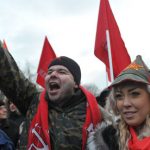 As Russia comes to terms with, or rather acknowledges with a dejected sigh the return of Vladimir Putin, one major question remains: how should the protest movement progress from here?  The fear is that given that there are no upcoming tests on the political horizon, those who participated in the protests will now simply throw their hands up and surrender.  Tomorrow Moscow is poised to host a protest rally, the outcome of which seems far more uncertain than those that were held prior to the presidential election.  As was pointed out earlier this week, once imbued with optimism, the mood among protestors has turned to one of dejection and despair.  It is not all doom and gloom however, says Reuters:

Sociologists and political analysts say that even if the protests ebb, the demands that have been voiced for more democracy, independent courts and transparency will continue to echo and chip away at Putin’s credibility.

“They may be a minority, they may be focused mainly in Moscow, but they remain an important factor that has eroded Putin’s legitimacy and will lead to other changes,” said Maria Lipman, an expert with the Moscow-based Carnegie Centre.

Bringing cases of electoral fraud to court is one means at the protesters’ disposal.

Some of the organisers have also suggested focusing their battle more on changing the capital from the inside by contesting city elections in Moscow in 2013.

“Moscow is the only city where Putin does not have a solid majority,” said journalist Sergei Parkhomenko, a protest organiser. “In the near future, we must wage a peaceful fight for Moscow.”