The Augur of August 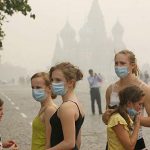 It’s rare to see a flutter of superstition traverse the financial papers, which tend to be austerely replete with stock market figures and financial analysis. As the month of August looms however both the FT and the Wall Street Journal are running articles today concerning the calamities that tend to occur on Russian soil during these four hot weeks, each featuring a timeline of some of the catastrophes, from Russian entering World War One, to Soviet troops arriving in Prague in 1968, to the sinking of the Kursk in 2000, to the wildfires last year. Both articles have drawn upon comments made by ING strategist Chris Weafer, who considers the short and long term effects of this peculiar seasonal disorder.  From the Wall Street Journal:

“August events, over the short-term, have never actually had any impact on the stock market,” Mr. Weafer said. “They can, however, shape future trends, such as Vladimir Putin’s arrival, and provide the catalysts for longer-term opportunities, such as in agriculture and food.”

An example of this long-term effect from August events comes from the formation of oil firm TNK-BP in August 2003. While in the short term this didn’t have a large effect on the economy as a whole, it caused a change to the rules for foreign investment in “strategic industries,” which has in turn made it more difficult for foreign companies to invest in key industries. And again in August 2009, an explosion at a prominent hydroelectric plant that directly weighed on only one stock ended up spurring debates on the quality of Russian infrastructure which in turn helped President Dmitry Medvedev’s program of modernization.

While Russian stocks fell 14% in August 2008 amid the outbreak of the Russia-Georgia war, the debt problems at Wall Street banks and falling oil prices probably had more effect on Russia’s exchanges than the bombs falling in Georgia. The broader MSCI Emerging Markets Index fell by 9% that month, and Russian markets fell a further 63% by the end of the year, Mr. Weafer said.