The Last Remnants of Freedom 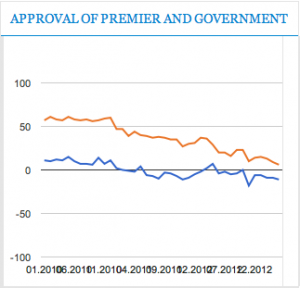 The Kremlin’s crackdown on human rights agencies and political organisations with foreign funding shows no signs of slowing.  Particularly chilling today was the news that the Levada Center is under investigation and may be forced to register as a ‘foreign agent‘.  This is a surprise: the center’s main activity is to conduct monthly, nationwide polls.  This could be described as a political activity in that it conveys the Russian public’s views on political matters, but it does seem a stretch, given that the Center does not have any specific political agenda and that its foreign funding is less than 3% of its total budget.  Furthermore, it does not advertise itself as a defender of human rights.  What the Levada Center has done, however, is publish a number of poll results indicating dwindling support for President Vladimir Putin in recent months, which may be more to the point.  The truth hurts.  But at least, when you’re Vladimir Putin, you can snuff it out.

The Levada Center’s director, Lev D. Gudkov, spoke to the New York Times about the wider implications of the Kremlin’s crackdown, and it isn’t pretty:

“We are now observing the end of an epoch that began with Gorbachev’s perestroika,” he said. “These are simply the last remnants of freedom, freedom of scholarship and freedom of information. That’s it — it’s ending with this. This prosecutor’s warning is not just a single isolated act, and it’s not just about us. It’s the end of a 25-year period in Russia.”