The Trials and Tribulations of Ukraine’s Gas Supply 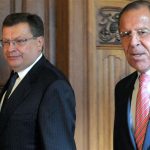 It’s that time of the year again.  As the nights draw in, leaves begin to descend over summer’s embers, and thoughts turn to the winter hearth, Russia and Ukraine lock horns over natural gas prices.  This time round, things are getting increasingly ugly, in a dispute which has been ongoing, though sometimes dormant, since 2009.  Whilst on the weekend Ukrainian Prime Minister Mykola Azarov took pains to assure television audiences that there was no prospect of a gas war with ‘strategic partner’ Russia, and that supply to European customers would not be disrupted, President Yanukovich has proved increasingly hawkish on the issue.  He has argued that Ukraine pays even more than Germany for its contract-bound gas imports, which in addition, are too voluminous for the country.  Waving the threat of legal action in the face of his former allies in the Kremlin has cranked the dispute up a notch.  An interview with Kommersant published today sees the President describe the conditions of the gas agreement as beffiting ‘an enemy’, and lambast the ‘poor relation’ jibes made by President Medvedev last month.

As the following segment from a Reuters analysis explains, it is perhaps Yanukovich’s litigation-happy attitude which has problematized relations on both sides, East and West.  Whilst threats of arbitration in Stockholm inflame Russia, the trial against Yulia Tymoshencko, who brokered the apparently disadvantageous gas deal, for abuse of office, has received unwelcome criticism from the EU.  As Yanukovich walks the precarious tightrope between the European and Russia orbits, he will have to tread carefully.  Someone may end up being left out in the cold:

Ukraine is being squeezed from two sides as it tries to renegotiate a gas supply agreement with its former master, Moscow, and advance towards a free trade deal with the EU.

Russia makes no secret of the fact that it would like more influence over Ukraine’s energy infrastructure, while the European Union objects to a trial that bolsters Ukraine’s negotiating position with Russia in the gas dispute.

But EU diplomats discern a possible outcome that gives Russia at least some stake in Ukraine’s infrastructure, and endeavours to keep its EU project on track with a reform that makes Ukraine’s state oil company, Naftogaz, more transparent and accountable.