There May Be Troubles Ahead… 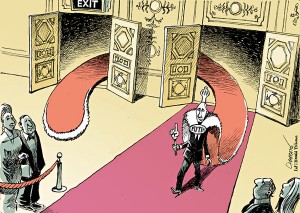 In the Washington Post analyst Masha Lipman has offered her views on how Vladimir Putin has maintained his stranglehold over Russia’s body politic for more than a decade.  It is, to her mind, the result of an unspoken contract with the Russian populace, which she explains in the extract below, a contract which is starting to prove unpalatably binding for certain parties:

To address the differences in society, Putin’s government has effectively offered two tacit pacts. For the conservative majority, the deal is: We deliver and you stay loyal. The government can’t provide services such as just courts or a trusted police force, but at least the high price of oil has supported steady growth in state-funded salaries and pensions.

The deal for the independent-minded minority centers on non-intrusion: You stay away from politics, and we do not interfere with your pursuits. You don’t have to like us or vote for us, you’re free to criticize our performance; and if you really hate us, the door is open: You can leave Russia. This has granted the modernized minority virtually unlimited opportunity for self-fulfillment — as long as they don’t tread into politics.

While the first pact still holds, the second has mostly fallen apart. When the mass protests against Putin’s rule began in December, it became clear that some Russians would no longer turn their backs on politics or put up with the lies, lawlessness and abuses of authority. Many declared that they want to make a difference.

The anti-Putin forces remain weak; they are a loose constituency without a political agenda or broadly recognized leaders. This enables Putin, for now, to dismiss them and proceed with his governance of manipulative politics, centralized power and egregious abuse of executive authority.

In his inaugural address Monday, Putin spoke about unity, common goals and ideals — a direct insult to those tens of thousands who protested his rule and the others (possibly as much as a third of Russians) who sympathize with their cause. Now that their tacit pact with Putin has been ruptured, it can’t be restored. Putin continues to react to their challenge with authoritarian policies and hypocritical rhetoric, which are, in turn, bound to broaden their ranks and further erode his legitimacy. The emergence of a cohesive opposition force will be only a matter of time.