Today’s The Day The Teddy Bears Have Their Protest 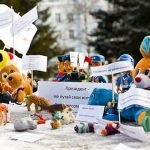 Thanks to years of practice, an armory of draconian laws and a fistful of weapons, Russia’s law enforcement brigade have just about perfected the art of protest squashing.  They have had their work cut out for them of late, with the rallies which have mushroomed across the country since December.  The opposition are however proving consistently adept at inventing ways of eluding the iron claw of the authorities.  We’ve seen Voina’s art protests, the Blue Bucket protests, single-person protests, clapping protests in neighboring Belarus: a whole panoply of alternative protest methods have emerged to evade the radar of the authorities.  The latest innovation, in the Siberian city of Barnaul, is a testament to the sheer ingenuity of the local opposition.  Protestors in the snow-laden town have created the simulcrum of a rally using a selection of placard-bearing figurines.  Too cute to quash?  Apparently not.  The Independent reports:

[…] Andrei Mulintsev of the local police department said the use of such “new technology” by protesters at “nano-meetings” could be illegal. “We think this is an unsanctioned public event… and permission is required from the local authorities,” he added.

Mr Mulintsev said police had asked the local prosecutor to clarify where the law stands on toy demonstrations. A decision is expected imminently.

We can but hope the nano-activists don’t end up in the big house.  Read the whole article here.