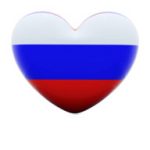 Pro-Vladimir Putin groups have been popping up all over the place lately – there’s even talk of a new working-class party that will promote his interests.  Seems there is no end to the thousands of people pushing for his return.  The soon-to-be-President’s latest gang of advocates only want to spread the love: a group has been going around Moscow promoting their leader with heart-shaped signs calling for ‘Love instead of Politics’, the Moscow Times reports.  Love has been a theme in his election campaign for some time now – in mid-January, he urged voters to ‘vote from the heart’; and a recent television advert, which caused a ton of controversy and quickly became an Internet sensation, portrayed a teenage girl’s first vote as a metaphor for losing her virginity, with the slogan ‘Putin.  First time only for love.’ (You can watch the video here.)  Gross!

What’s most disturbing or just plain offensive about this angle is that Putin, who has been in power since 1999, is a political leader who acts most transparently in his own interests.  He has enriched his friends, failed to diversify the economy in times of petrodollar plenty, and overseen a growing spread of corruption.  Not only this, but his most resounding election cry this year has been: ‘the battle for Russia is on!‘  Not very lovey, is it?  Putin is, in other words, the exact opposite of the selfless lover who wants nothing except the well-being of his beloved Russia.  Further to this, love is often used as a counter by protest and opposition movements (the OWS movement being the most recent case in point) – you might say that its appropriation here for authoritative purposes is the ultimate blow to the spirit of protest.

‘the disingenuousness of his campaign deepens anti-Putin sentiments that have already inspired tens of thousands here to take to the streets.’