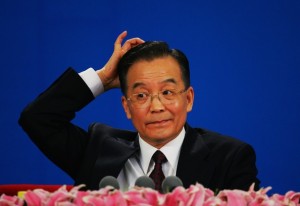 Unless you’ve been living under a rock (or involuntarily off the grid thanks to Hurricane Sandy), you’ve probably been watching the repercussions of a major story published in the New York Times one week ago by David Barboza exposing massive wealth and disproportionate corruption within China’s first family under Wen Jiabao.

Barboza’s article presents a complex tapestry of more than a dozen family members and friends of the prime minister accumulating a staggering fortune of some $2.7 billion.

The reactions to the article have been swift and severe.  The Chinese government immediately blocked the NYT website behind the Great Firewall.  Media within the country were strictly silent on the issue.  Foreign Ministry spokesman Hong Lei came out swinging with an argument appealing to the victims-of-imperialism set:  “There are always some voices in the world that do not want to see China develop and become stronger, and they will try any means to smear China and Chinese leaders and try to sow instability in China.”

It’s not often these days that one item of investigative journalism can cause giants to stumble. Moisés Naím has described it as “an article of immense importance” which “could not have been produced by a blogger, by social media activists or by a journalistic organization that merely “aggregates” – that is, reproduces on the web – the original contents of others.”

But are these kinds of blockbuster scoops by major news organizations under threat?  For your average corrupt despot, there are a bevy of legal options available to dissuade major news organizations from ever writing a negative word about your conduct.  And what the world should fear most is if Wen Jiabao and co. begin to copy the “lawfare” defense techniques of their friends in Singapore – the world’s least-recognized brutally authoritarian state.

That’s precisely the question posed in a recent post on the Passport blog of Foreign Policy by Isaac Stone Fish.  The author writes:

Singapore, a city-state of 5 million people armed with some of the world’s strongest libel laws, successfully coerced the world’s most prestigious newspaper into retracting coverage that was only mildly critical. (…)

What if Wen and his family decide to take the New York Times to court and sue it for defaming Wen Jiabao or the Communist Party? Sure, Wen and his family would likely prefer the embarassing story to fade away, especially as it’s just weeks away from the 18th Party Congress, where Wen and his peers are expected to formally begin to yield power to the next generation of Chinese leaership. And because China has a far worse reputation for cracking down on press freedom than Singapore does, one can expect the Times to fight much harder this time. But this is a case that Wen and his family could surely win in a Chinese court.

So what would happen to international press coverage of China if the Times were forced to apologize to (and pay steep compensation to) China for the Barboza article, and what kind of quality information on Asia affairs would we be reading hence forth?  As noted by FP, the article comes at a critical moment in China’s transition to a new leadership, and already there are other factions seizing on the article to say that Wen Jiabao has damaged China’s credibility.

In full disclosure, I represent on a pro-bono basis an opposition leader in Singapore, Dr. Chee Soon Juan, who has had his life nearly destroyed by the government over his mere suggestion that citizens should have the right to vote for other parties.  Dr. Chee, who has been supported by Amnesty International as a free speech victim and was granted the Freedom Award by Liberal International, has never posed any threat to law and order in Singapore, and in fact has never broken any law in his political activism.  Yet still the ruling authorities have brought down the hammer of defamation cases to the point that he has been bankrupted and financially eviscerated.

This past May 20, 2012 I attempted to visit my client in Singapore on my way back home from Thailand.  Although it had been more than two long years since I published a White Paper exposing the Singaporean government’s attack on civil rights, with nothing but silence since, I was detained for an interrogation at the airport and then forcefully expelled from the country, having committed no other offense than wanting to meet with my client.  The expulsion was denounced by AI, but like most events in Singapore, it largely went unnoticed.

While we can recognize that Singapore is a key U.S. ally, the kinds of things this government gets away with is nothing short of astonishing.  Whether you are talking about the New York Times or the Wall Street Journal, there really has not yet been a media organization willing to stand up to Singapore’s bullying via lawyers.  As many of my blog readers know, even the prestigious Yale University, once thought to be a beacon of liberties and democratic values, was forced to ban any type of political demonstrations on its campuses at its joint institution with the National University of Singapore.

Defamation, libel, and slander laws serve an important purpose in free societies with rule of law courts, offering important protections of rights of individuals against false and malicious publications aimed at damaging reputation.  However, when the case involves a public figure – namely a head of state or someone holding office – and the combination of a non-independent legal system, the exercise of free political speech becomes endangered.

Abuse of defamation laws by autocrats, businessmen, and companies is nothing new of course.  There’s quite a long list of prominent Central Asians, Latin Americans, and Africans whose names are rarely seen in print – even a blog article or a tweet gets a cease-and-desist letter from a fearsome London law firm, to the delight of their accounts receivable.

But the scale on which these defamation cases are taking place, and the buckling by major media outlets who need to continue doing business in such growing markets, should be very worrying indeed.