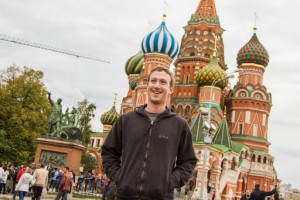 Facebook CEO Mark Zuckerberg has been hanging out with Prime Minister Dmitry Medvedev in Moscow, bringing him a specially-made t-shirt. The meeting must have been something of a milestone for Medvedev, whose name is frequently given the moniker ‘tech-savvy‘ in the press, thanks to his enthusiasm for social networking, and the Facebook site in particular (he ‘de-friended‘ Georgia in February).  ‘Medvedev could barely contain his excitement at meeting the co-founder of the world’s largest social network. “I have a Facebook page myself,” he told his guest.’

But there is some indication that Zuckerberg’s visit was perhaps not merely the mutual appreciation meeting that Medvedev may have hoped for.  Zuckerberg praised Russia’s IT industry ‘as promising an area for investments as its natural resources sectors’, and looked pleased as punch to be a guest in Russia (see above).  But there is some indication that Zuckerberg’s enthusiasm is driven by the desire to expand his operations back home than to build new cooperative ties.  It has ben noted that, ‘According to Anatoly Karachinsky, president of Russia’s biggest IT holding, IBS Group, Facebook has been hiring programmers away from big Russian Internet companies.‘

And, according to Bloomberg, Facebook is ‘actually lagging in the Russian market’ in comparison with Vkontakte, and acknowledged some ‘controversy’ surrounding Zuckerberg’s visit, spurred by rumours that he was there to poach Russian talent to improve his operations in California, rather than to invest in new Russian growth.  Facebook apparently denies this…