Will Kenya Learn from History? 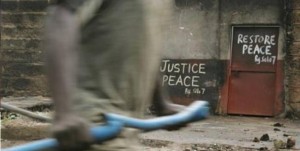 Ten years ago Kenya captured the imagination of the world when it experienced a change of power from the reign of long standing leader Daniel Arap Moi to Mwai Kibaki.  It was a change that was seen as having broken Kenya from the vestiges of dictatorship and heralding the opening a new era, accompanied by a boom in economic growth.

Ten years on, as Kibaki prepares to step down having overseen a fairly stable economic environment, Kenyans are faced with yet another challenge of consolidating on that success with the approach of fresh elections on March 4, 2013, bringing back the very real risks of electoral violence that rocked the country in 2007-2008 which could derail the progress of recent years.

With the Kenyan economy projected to grow by 5% this year, the credibility of the upcoming elections will be key determinant in gauging international confidence and foreign investment in the system left behind by President Kibaki.

The East African nation has not had the most pleasant of experiences with elections, with more than a thousand people killed in ethnic clashes ignited by competing elites five years ago. Experts and witnesses are currently appearing before the International Criminal Court (ICC) to shed light on the motivations, actors, and even those who allegedly organized the violence in the hope that the country can learn a few lessons from the past, but the case is far from clear, and even unfair according to some commentators.  Many of the same people involved in the violence during the last election will figure as significant players, while the entrenched elite has yet to display any real understanding of the social issues affecting the vast majority of the population.

Either way, the March election is likely to cause an economic disruption.

“Kenya is heading into an election year with a transformative new constitution but historically, the economy slows down during election periods,” says Johannes Zutt, World Bank Country Director for Kenya. “A peaceful political transition and export-led growth will provide a window of opportunity for the economy to achieve higher growth and create more jobs for the large number of people entering the workforce.”

The ability to generate new jobs post-election will be enormously important.  The real danger Kenya faces from instability around the elections is the possibility of unleashing the widespread public dissatisfaction with the quality of governance, as the economic boom has not yet trickled down to most citizens. While some strides have been made in growing a middle class, the majority of Kenyans still have to grapple with daily challenges, like unemployment, poverty, access to electricity, access to education and health services.

Speaking with the columnist Baobab at the Economist, the Kenyan anti-corruption crusader John Githongo recently stated that the repeated food shortages experienced in Kenya every few years are in part the result of a calculated strategy of unpreparedness on behalf of corrupt elites who benefit from the exploitation of food imports.

“Corruption can create an elite which creates a system of patronage that in itself produces a level of stability, where the goodies are being shared out by an elite, and a bit of it trickles down to the poor,” Githongo tells the Economist.  “Those poor who complain are locked up or killed, and that’s the way it has been for a long time.”

According to the World Bank report cited above, young Kenyans face considerable hardship, discrimination and inequality of opportunity in accessing good quality jobs, even though the ratio of Kenyans engaged in family farms has declined, from two-thirds to less than half of the workforce, in the past two decades due to Kenya’s rapid urbanization.

“Economic instability, weaknesses in infrastructure and pervasive corruption limit business growth and job creation,” says Gabriel Demombynes, the Bank’s Senior Poverty Economist for Kenya and one of the lead authors of the report.

“A job creation strategy is needed to move more Kenyans into better wage jobs, and policy makers, especially at local levels, should embrace informal household enterprises as legitimate parts of the Kenyan economy to enable them contribute to increasing productivity.”

In order to address these issues, the government needs to adopt tax and expenditure policies that will create incentives for savings and investment in the domestic economy, which will pave the way forward for the creation of quality jobs.

For all its shortcomings, the Kibaki administration has scored some notable successes.

Despite the global economic meltdown and the post-election violence, the Grand Coalition Government was able to steer the country to recovery. The Kenyan economy recorded 4.5% growth rate in 2011 ,with this year’s projection even higher pecked at 5%. It appears the dream to attain middle income country status by 2030 is firmly on course.

Poverty levels are said to have reduced from 56 percent to 46 percent, while the country has also made significant strides in infrastructure development with increased capacity at the Port of Mombasa and the beginning of construction of a new port in Lamu, cementing Kenya’s role as East Africa’s principal trade and transport hub.

The new port is part of the Lamu Port-South Sudan-Ethiopia Transport Project (LAPSSET), which President Kibaki says will be a new economic development corridor aimed at opening up vast areas in the northern part of the country.  It will also fast track regional integration efforts by linking two neighbours, South Sudan and Ethiopia.

However in order to achieve these infrastructure goals, government spending consistently overextends.  Kenya’s national budget stands at Ksh250 billion and the tax revenues is pegged Ksh180 billion, leaving the country at the mercy of donors who foot the difference.  Even though the government is able to raise 80% of its budget from tax revenue, a stronger effort must be made to wean off international aid.

However bright the economic prospects look for Kenya, all eyes are on the uncertainty of elections.  The long term development of the country will be determined by its capacity to manage political, economic and weather-related shocks, which have become the norm rather than the exception in the past five years.

In order to succeed, Kenya will have to learn from history, and urge the political elites to accept that a higher quality of governance, attention to social issues and employment, and the abstention from manipulating tribalism and ethnic violence during elections will ultimately deliver wider prosperity for all citizens.  If the upcoming March elections are a repeat of 2008, then it will be difficult to imagine another recovery as successful as last time.