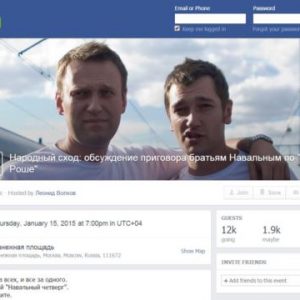 Russian prosecutors have asked a court to sentence opposition leader Alexei Navalny to 10 years in prison on charges that he stole $520,000 from two companies.  The Kremlin critic commented, ‘Life makes no sense if you have to tolerate endless lies. I will never accept this system, which is built on lies.’  The authorities have successfully ordered the blocking of a Facebook page calling for a demonstration in his defense.  Analysts have speculated about how much the economic crisis will affect Putin’s popularity, but in his vertical of power, ‘it is not possible to remove the top link without the whole system coming down‘.  China has offered Russia verbal support regarding the current economic crisis, expressing its belief the country will emerge unscathed.  Commerce Minister Gao Hucheng added that expanding a currency swap between the two nations and making increased use of yuan for bilateral trade would be the best assistance for Russia.  The director of the BBC World Service has opened up about the ‘information war’ with the Kremlin.  Journalists from beleaguered independent TV channel Dozhd are trying to see the bright side of their new HQ, two months after what many saw as a state-sponsored eviction.  Mikhail Lesin, the head of state-controlled Russian broadcasting giant Gazprom-Media, who is facing a U.S. investigation for money laundering, has resigned from the post.

President Putin has invited North Korean leader Kim Jong Un to visit Moscow next spring for the anniversary celebrations of the defeat of Nazi Germany in World War II.  In a manifestly hawkish mood, the President told a Moscow audience, ‘Of course, no one will be able to intimidate us, or contain and isolate Russia.  No one has ever been able to and no one ever will‘.  At a Defense Ministry meeting he asserted Russia’s military strategy ‘remained purely defensive‘.  The Foreign Ministry says it will retaliate against the new Western sanctions against the Crimea region which it has described as a ‘collective punishment‘ on the region’s pro-Russian residents.  RFE/RL reports on the disturbing work of Timur Isayev, a ‘self-styled antigay activist’.

Contrary to many suppositions, it seems that Russia has not dipped into its gold reserves as a way of dealing with the crisis.  Putin’s exhortations to tycoons to bring their assets back to Russia seem to have had some effect on the country’s richest man.

PHOTO: Russian opposition politician Alexei Navalny (left) and his brother, Oleg, on a Facebook page calling for a January 15 demonstration near the Kremlin in support of the embattled activist. (website screen shot)