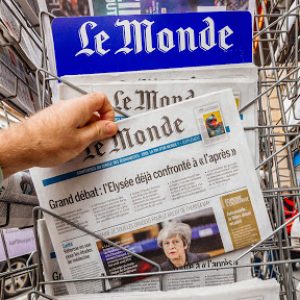 The French daily newspaper Le Monde has published a profile of Robert Amsterdam.  The original article can be viewed online here – below is an English translation.

Since 2003, the Canadian business lawyer has been defending Mikhail Khodorkovsy, former CEO of Yukos, the Russian Oil Group. In the name of efficiency, he spends most of his time out of the court mobilizing his networks.

One must be cheeky to declare oneself ‘communist’ at the age of 12. Especially, when, as a lawyer, one specializes in defending big industrial groups against state interests. For Robert Amsterdam, this is the story of his life. He is audacious, hyperactive, he has no complex. He thinks fast and speaks even faster, some “f” words slip off his tongue from time to time when he feels at ease, just as if the word was the label of a true New Yorker.

He is a kid from the Bronx, a tireless traveler and also acompulsive reader. While in transit in Paris, he carries around a heavysuitcase. What do you find in it? Books: “Capitalism withoutDemocracy”, “Philosophy and Politics of Czech Dissidence from Patockato Havel”, “The International Law of Occupation”, as well as a longarticle on Indian strategy on foreign policy.

Robert Amsterdam has made himself a reputation in business law sincelong time but he imposed himself in the international press since 2003when he started defending Mikhail Khodorkovsy. The former CEO of Yukosgroup, the Russian oil group is serving an 8 year sentence forfinancial offences. He was spared nothing: a parody trial, imprisonmentat the other end of the Federation, harassment.

Robert Amsterdam was himself arrested in September 2005 and thenforced to leave the country within 24 hours. Mr. Amsterdam hopes thenew President, Dmitri Medvedev, will be more lenient. “MikhailKhodorkovsky’s liberation would be the sign of a change in therelationships between the State and the people, moving away from thelegal nihilism”, he says, using the new the President’s own words.

In September 2006, the lawyer created his own blog(www.robertamsterdam.com). It is available in 5 languages and isdesigned as an information platform – with a critical tone – on Russianand the former Soviet area. The main topics are: energy and HumanRights. Robert Amsterdam shares his incisive analysis and hostscontributions from personalities such as journalist Grigory Pasko, orthe opponent Chee Soon Juan, whom he defends pro bono againstSingapore. The site counts 25.000 to 50.000 visits per day.

Russian politics is Amsterdam’s passion, but he is neithersentimental nor romantic about Human Rights. His involvement andopen-mindedness came early. In high-school, in Toronto, where hisfamily moved during his childhood, he took part in the creation of theschool newspaper that had to stop under the pressure of theadministration, after the publication of an interview with AbbieHoffman, famous anarchist of the 70’s.
He traveled to Europe with his mother when he was 15 years old. Whileshe was trying to cure her asthma in Czechoslovakia, he took theopportunity to visit the continent. Year after year, his passport wasfull of new exotic stamps, from Africa as well as the Soviet Union.

His step-father finally managed, by miracle, to send him to College.In class, he was best at Marxism-Leninism. “I was one of the bestspecialists in Canada”, he says seriously.
When he was 19, he thought of becoming a journalist or a teacher. Hissister, who is now a lawyer, advised him to study law. In law school,he met his future partner, Dean Peroff. “He used to spend the nightreading philosophical bullshit, while I devoured the People’s Daily” heremembers. “We both had understood that we were not made for this waspschool”.

Mr. Peroff recalls Mr. Amsterdam’s ‘phenomenal energy’, “Robertalready thought about our future partnership, while I was justwondering how to finish school! He was going through a transition,after his fascination for politics from the East, he was developing anew point of view on business.”

In 1980, the two created their own law firm in Toronto. They succeedin a niche: business law in emergent countries in South America andAsia.

For Robert Amsterdam, law is a chess game. In many countries,cheating exists, so we must invent ways to defend ourselves. He writestechnical articles on the evolution of relationships between thebusiness world and the states, especially since September 11th.

“The business world is attacked but it does not attract publicsympathy. I have a very negative opinion of the war against terrorism.We used and extended repressive laws; we sent massive police forcesagainst big corporations and their managers. This dilution of our lawsand of our values is far more serious than the financial crisis.”

Robert Amsterdam defines himself as ‘an old school guy, follower ofthe Ten Commandments’, and he has a particularity in the profession: heworks more outside the court than within the court. Anthony Julius whoshares several cases with him says: “he is full of ideas, and he hasquite an unusual way of understanding political matters beneath legalaffairs. He understands that a lawyer’s job is not only in the courtand uses the media as a new kind of forum.”

King of lobbying, networking, building strong teams of specializedlawyers, Robert Amsterdam works in 10 countries and on all thecontinents. “Since the Khodorkhovsky case, I spend more time withpoliticians than with judges.” His critics point to his non-conformistapproach of defense, the blurring of lines. He has only one instrumentof measurement: efficiency.

“Commercial entities have the right to be defended, just likeindividuals”, says Peroff. But this does not go without risk. One day,in Lagos, Nigeria, while he was dealing with a commercial dispute abouta telecom company, there came his opponent with 30 armed men. Incertain countries, the penal code is less important than the viril code

In 2002 Amsterdam defended the interests of The Four Seasons hotelsin Venezuela when the hotel in Caracas had to be closed down. A fiercebattle went on in domestic courts then in American courts for thecontrol of the hotel. Venezuelan business men even considered taking itby force: “they thought they would scare the gringos away”, saidAmsterdam, smiling, “but we had our own private security force”.

Since then, all along his various trips, Amsterdam always stays inone of the Four Seasons hotels, for free. The one in Moscow is stillunder construction. But it is not certain that he will be invited asone of the first guests.

Career:
January 1956 Born in New York.
1980 Creates Amsterdam & Peroff law firm in Toronto (Canada)
2005 His client, Mikhail Khodorkovsky is sentenced to 8 years in prison.
2005 Arrested in Moscow on September 22nd, he is forced to leave the country.
2006 September 4th, creates his blog: robertamasterdam.com
2008 In August, his request for the liberation of Mikhail Khodorkovsky is rejected.