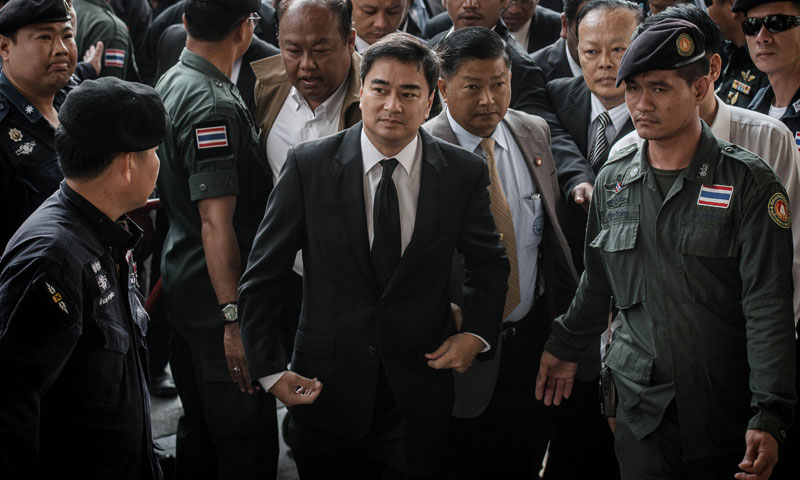 It was five years ago on May 19th 2010 that 100s of unarmed Thai pro-democracy protesters sought refuge in one of central Bangkok’s most famous temples – Wat Pathum. They had gone there under the promise from the Thai authorities that the temple was a designated safe haven and to escape the snipers and soldiers sent onto the Thai capital’s streets by the Abhisit “Mark” Vejjajiva-led government. By that point, after two months of protest, almost 90 persons – including children, soldiers and dozens of unarmed civilians – were dead and 2000 people had been injured as downtown Bangkok was turned into a battlefield.

The night before those last desperate people cowered in Wat Pathum, members of the Thai senate had met with protest leaders in an attempt to secure a peaceful resolution to a pro-democracy Red Shirt demonstration that had slowly escalated into a national crisis. The senators went to this meeting believing they had been guaranteed by Prime Minister Abhisit that if the protest leaders agreed to unconditional talks then his government’s soldiers would cease their “crackdown” and allow the protest to peacefully disperse.

The evidence we’ve published in the last few days – including a memo of the meeting held between the protest leaders and the senate representatives – now shows, unequivocally, that the leaders of the UDD/Red Shirts did agree to such talks and were more than willing to do so without condition and work with the authorities to peacefully disperse the protest.

Yet, what happened on May 19th, the day after the senate and UDD/Red Shirt negotiations, clearly shows that Abhisit was not only acting in bad faith but that he had used the senate representatives in a ploy to dupe the protest leaders. And, by the late afternoon of May 19th, the very Thai Army soldiers Abhisit had deployed on the streets of Bangkok, were shooting and killing the unarmed civilians cowering in Wat Pathum.

By the night of May 19th six of this persons seeking refuge in Wat Pathum were dead. Mark MacKinnon, a highly respected and experienced correspondent working for the Canadian newspaper, The Globe and Mail, was present in Wat Pathum and an eyewitness to unfolding events. In 2011 he told the BBC that the temple “was a designated safe area” and that he “spent hours in there and never saw a gun”. MacKinnon’s testimony is backed up not only by many other eye witness accounts but, most importantly, by the cold hard incontrovertible facts of a criminal forensic report.

We recently published the findings of this forensic report and it establishes that none of the six persons shot and killed in Wat Pathum were handling firearms or explosives, that all were shot from the direction of where a group of Thai soldiers were positioned and that there was no material evidence of those soldiers being fired upon.

So why was PM Abhisit – a man educated at one of the UK’s most expensive and elite private schools and who later graduated from Oxford University – engaging in such duplicitous and reckless methods in such a volatile situation? Why was he allowing his troops to endanger and kill Thai civilians? Was Abhisit not aware of his legal duties as PM to make sure that the minimum amount of force was used even when dispersing illegal gatherings?

As the evidence we’ve published reveals Abhisit was clearly advised by his Attorney General and knew full-well the legal limits of any dispersal operation he ordered.

An obvious question arises from all this – why hasn’t Abhisit been held to account for his actions? Did he lose control of the soldiers he’d unleashed on the very people it was his duty to protect? And if he did lose control why didn’t he tender his immediate resignation and commit to securing a criminal prosecution of those Thai Army officers and soldiers who’d murdered unarmed civilians who were seeking sanctuary in his own government’s designated safe haven?

As history shows Abhisit did none of this. The man pro-democracy activists now call “Mark of the 100 dead bodies” bookended his role in this bloody chapter of Thai history by responding to a BBC News interviewer’s questions about the Bangkok Massacre that “unfortunately some people died”.

We hope by publishing these documents that the Thai people can begin to retain some control over their past and that the impunity granted the likes of Abhisit eventually withers on the vine.

We hope that the “unfortunate” dead of the entire Bangkok Massacre are not forgotten and that justice is served.