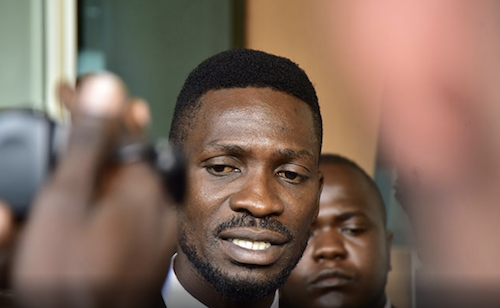 The following press release was distributed to media on 20 August 2018.

Robert Kyagulanyi Ssentamu, an opposition Member of Parliament of Kyadondo East constituency in Uganda who is most widely known as the pop musician “Bobi Wine,” has retained the international law firm Amsterdam & Partners LLP following his violent arrest on August 14, 2018 while campaigning in the North Western town of Arua following clashes with ruling party cadres.

“Mr. Kyagulanyi’s arrest was not only a politically motivated act of repression, but furthermore he has since been subjected to inhuman and horrific acts of torture by the Ugandan security services from which it is possible he may never recover,” said Robert Amsterdam, founding partner of Amsterdam & Partners LLP. “This outrageous and reprehensible act of state aggression – an episode not seen since the days of Idi Amin – requires a robust and broad response from the international community to secure his safety and to bring his torturers to account.”

Kyagulanyi’s arrest along with 34 other people took place around the same time that President Yoweri Museveni was campaigning in the same area of Arua, allegedly after protesters had thrown rocks at the president’s car. Appearing in a military court on August 16, Kyagulanyi was charged with illegal possession of firearms and ammunition, even though he was originally arrested on the basis of obstructing a presidential motorcade. A night before he was arrested, his driver was shot dead by soldiers or presidential guards. The driver at the time was seated in the same seat where Bobi Wine normally sits.

According to dozens of local and international media reports, his court appearance featured unmistakable signs of torture. Badly bruised and disoriented, Mr. Kyagulanyi was unable to walk, unable to speak, and unable to acknowledge the charges filed against him.

“The situation for Mr. Kyagulanyi is profoundly grave, immediate, and deserving of urgent action and intervention,” said Amsterdam. “When a state behaves with this level of impunity and violence, there are few statements or resolutions that will stop them from the murder of an innocent opponent like Bobi Wine. That’s why we need to hit these officials in their wallets with a Magnitsky-style sanctions schedule as they need to understand the consequences of this attack on human rights.”

Amsterdam’s referral to the Global Magnitsky Act, which was passed by the US Congress with broad bipartisan support in 2016 in honor of the murdered Russian whistleblower-lawyer Sergei Magnitsky, empowers the executive branch to impose visa bans and targeted sanctions on individuals anywhere in the world responsible for committing human rights violations or acts of significant corruption.

More information about Mr. Amsterdam and the law firm is available at amsterdamandpartners.com.