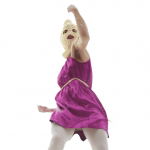 As Russia threatens to explode in protest over today’s election results, police have been carrying out a methodical detention of members of the feminist punk band, Pussy Riot, the most recent arrests coming just two hours ago.  RIA Novosti reports that the group –  six of them now arrested in total – could face ‘up to seven years in prison’ for their anti-Putin protests, which involved donning full masks and singing a ‘punk prayer’ about Vladimir Putin – first on Red Square, and then inside a Cathedral.  Their use of the church as a base has landed them in some serious hot water.  Police are accusing them of having ‘shouted insults at believers and churchmen’.  If they are charged with ‘religious hatred’ as is being threatened under a Russian government that has lately been increasing the powers of the Orthodox Church, they could face such a harsh penalty.