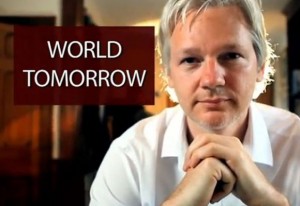 The Guardian’s former Moscow correspondent and co-author of the book “Wikileaks: Inside Julian’s Assange’s War on Secrecy,” Luke Harding, has a withering take on the hacktivist’s new talk show on RT, which debuts tonight.  Whilst he might have scored a media coup with his choice of guest – Hizbollah leader Hassan Nasrallah, Harding argues that any point Assange wants to make about defying power structures is hopelessly limited when his platform is a Kremlin-funded operation:

The mystery is why Assange should agree to become a pawn in the Kremlin’s global information war. Perhaps he needs the money. Assange’s anti-American agenda, of course, fits neatly with the Kremlin’s own. Russia prides itself on having undesirable allies; expect Venezuela’s Hugo Chávez or Belarus’s Alexander Lukashenko on future shows. In Tuesday’s interview Nasrallah expressed support for the Syrian regime of President Bashar al-Assad. By happy coincidence this is Moscow’s position.

It’s inconceivable, meanwhile, that RT would interview Doku Umarov, the Islamist leader whose followers are fighting a vicious war in southern Russia, and whom Moscow regards as a murderous terrorist. (When the Australian TV channel ABC interviewed one of Umarov’s predecessors, Shamil Basayev, who was later assassinated, the Kremlin expelled the channel from Russia). Nor is Assange likely to interview leading critics of the Russian regime.