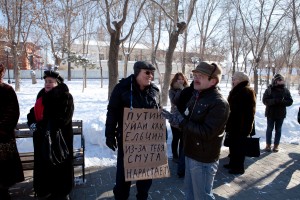 Moscow might have been the focal point of the weekend’s opposition rallies but there is proof that Russia’s smaller cities do not lie in regional oblivion, impervious to the tremors shaking the foundations of the Kremlin.  On Saturday, I had the fortune to witness an opposition rally in the Southern Russian city of Astrakhan. Situated in the fertile expanse of Volga Delta, this town of just over half a million inhabitants acts as the Federation’s metropolitan conduit to the natural riches of the Caspian Sea. Whilst the city’s main arteries, the canals which interlace the eleven small islands that constitute its spread, have been entirely frozen in the worst snowfall seen in ten years, it seems that the spirit of opposition has not been entirely buried by the chill. 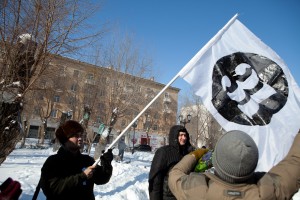 At midday on Saturday, a gathering of around 80 activists braved slippery pavements and skin-blisteringly cold temperatures to march from Pushkin Square to Marine Park, for a 50-minute assembly for “Fair Elections.”  As was noted by the Wall Street Journal at the end of last year, the results of the December 4 Duma elections in Astrakhan were believed to have seen 30% fraud in favor of United Russia.  Despite the presence of around 40 policemen, the rally was conducted peacefully, characterized by rosy-cheeked camaraderie from flag-bearing Just Russia, Communist Party, Strategy 31 and Other Russia supporters.  It featured speeches by local Just Russia leader Oleg Shein and communist party chief Alexander Kochkov.  The photos which can be seen here and in the gallery above, give perhaps the best idea of the conditions of the meeting, where the white ribbons of the assembled crowd found their natural corollary among the surrounding snow-lined trees. 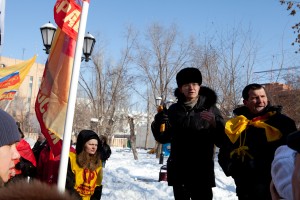 Interestingly it was noted by one observer that, whilst a number of camera crews stood at the ready to capture images of the meet, two of the city’s prominent press photographers were absent. It soon became clear from perusing local live blogs that another event had drawn their attention. Following the opposition/pro-Putin rally binary which seems to have taken root over past months in Russia, an event in celebration of the President took place at the same time in the distinctly balmier interior of the local sports complex, Spartacus.  Photos of the Putin love-in can be seen here from the live blog of local youth leader Alexander Alymov, who apparently gave an address to a pliant crowd of Putin loyalists (of which, it would seem, there is an abundance in Astrakhan).  This event offered not only a roof, but also traditional folk dancing, a performance by ‘charming’ local celebrity singer Maria Maksakova and a cornucopia of free cakes, sandwiches and drinks.  The number of attendees was considerably higher than at the opposition assembly.  It seems that whilst vote rigging continues to cement United Russian hegemony in the town, the party has, regardless, proved adept at carving an image of itself as Astrakhan’s party of plenty with many a Gazprom-sponsored hot buffet to seal voter approval.  More on this topic and other matters Astrakhanian to follow.