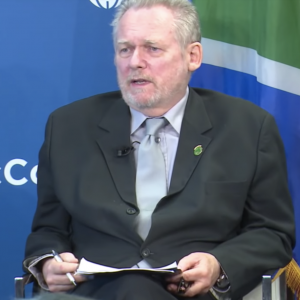 Editor’s note: As the Amsterdam & Partners LLP team expands its presence in Washington DC, we thought it would be interesting to offer a space on this blog for members and partners to occasionally share notes from the many interesting events hosted around town, which often deal with topics and regions of concern to our international clients. In today’s edition of our hastily titled vertical, Beltway Journal, Bennett Artman reports from the Atlantic Council’s recent hosting of South Africa’s Minister of Trade and Industry Rob Davies.

This past Friday I had a pleasure of attending an interesting talk hosted by the Atlantic Council, featuring South Africa’s Minister of Trade and Industry, the Honorable Rob Davies.

Over the course of the event, Minister Davies made one thing very clear: South Africa and its continental neighbors, together, face an uncertain place within the context of an increasingly globalized economy – but despite those challenges, there’s a lot of room for optimism for foreign investors.

Efforts by delegations from the African Union and South Africa have made some serious headway in persuading Nigerian President Muhammadu Buhari to sign onto the African Continental Free Trade Agreement (AfCTA), which if finalized would bring the signatory nations one-step closer to establishing one of the world’s largest trading blocs, in terms of number of sovereign states, total population and aggregate GDP, estimated to be 1.2 billion and nearly $3 trillion USD. Put simply, the AfCTA would make the continent economically comparable to India or China.

But, as Minister Davies explained, the AfCFTA is merely a tool with which a better future may be achieved for South Africa and the African neighborhood. Stressed during today’s discussion was the importance of diversified investments in value-added industries, infrastructure and education in order to bolster and advance both South Africa’s and the continent’s position within the global economy as the 4th industrial revolution gets underway.

The Minister also focused his attentions on developments outside the continent. In light of increased US protectionism, Mr. Davies echoed the concerns of many US trade partners when voicing South African President Ramaphosa’s ambitions to pushback against US tariffs on steel and aluminum. The Minister is understandably baffled by South Africa’s inclusion in this year’s radical Section 232 tariffs on steel and aluminum, emphasizing quite plainly that South Africa poses no national security threat to the United States, and that suggestions otherwise were unfounded and truly detrimental to the US-South African relationship, let alone the ability of the Ramaphosa administration to realize its goals of more inclusive growth.

All in all, Mr. Davies felt that South Africa’s capacity to prepare itself for the digital future is dependent on several internal and external factors, namely the same issues which has held back the country in the past: poor education system, stark and penetrating inequality, and the absence of a comprehensive continental free trade area among other things.

If there’s one thing to take away from today’s session, it’s this: the Ramaphosa administration wants to indicate to global markets that it is committed to dismantling the structural barriers to progress that for so long have been an indisputable element of South African society – but for the cynics, it is unclear if they have the capacity to do so.